Yes, I know what anyone looking at this post is thinking – Disney’s version of Davy Crockett? Really?? Admittedly, not only was this not exactly a film on my viewing list, but I had no idea this particular “Davy” film existed (actually I didn’t think I knew — but as I watched the final impressive siege on the Alamo – a scene that, along with the Injun siege earlier in the film reaches an impressive level of carnage surprising for not only 50’s television, but a show brought to us by Disney – had long-buried memories coming back of having watched at least this closing act way, way back in, I’m guessing, likely my pre-pubescent years)… but it was part of the viewing curriculum for the online course on the movie Western I’ve been taking, so why not. A chance to watch something I would never have chosen on my own is a good thing, isn’t it? 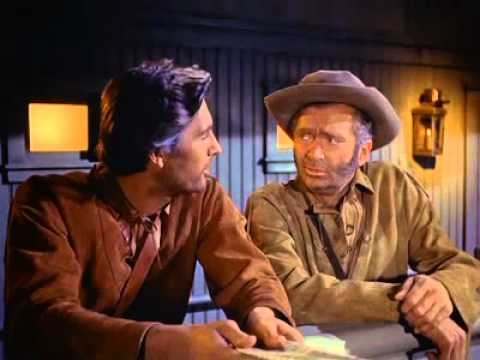 So… straight from the heavily sanitized vaults of the wholesome Disney stable comes the legendary tales spanning the burgeoning frontier of that coonskin-cap wearing American folk hero Davy Crockett (Fess Parker, who fancied himself as a kind of Americana paragon, a forerunner in the mold of Ronald Reagan, before retiring from acting at 49) along with his good natured loyal sidekick, the fellow homespun frontiersman Georgie Russell (goofy coot Buddy Ebsen a character actor who was already decidedly seasoned by the time I was watching him on television playing aging private eye Barnaby Jones – with the absurd occasional chase and fight scenes he’d get mixed up into as on-the-level absurd as watching a very creaky 80 year old Robert De Niro trying to move like a younger version of himself in Martin Scorsese’s otherwise epic The Irishman —I mean, how a guy like Ebsen – think Jack Elam with slightly less bulging wayward eyes — not only got a starring TV gig, but one that lasted eight years, I guess speaks to the strangeness of television in the 70’s… but, hey, more power to him).

Having been cut together from the three episodes that made up the Davy Crockett miniseries (a show that turned out to be an unexpectedly huge television success for Disney naturally leading that ol’ opportunistic capitalist pig dog Walt to have his minions mash the thing together into a manageable feature length and rush into theaters as soon as possible), the resultant film might be decidedly episodic, and filled with insane levels of pro-America Cold War myth-building (considering that when I googled his name I discovered an actual US nuclear weapon was named after Davy in 1958 should give you an idea just how intrinsically linked his image – and more importantly, the Disney-created image – would become in the insidiously destructive Cold War imperialist chess match that Russia and the US would fervently engage in, right up to today in fact, in which the more-psychotic-than-ever Biden-led US has made quite clear its goal of taking out what remains of the former Soviet Union by any means necessary – and that includes whatever copious amount of carnage and civilian death – even if it means bringing us to teetering at the brink of nuclear war), but… yet… what can I say… you gotta hand it to Walt (and, in this particular case, journeyman director Norman Foster), with its impressively staged large-scale battle sequences, excitingly captured horse chases and overall forward moving sensibility (hell, Davy can’t even cross a river without a surprise attack by an alligator!), it may be propaganda, but damn if it isn’t entertaining! 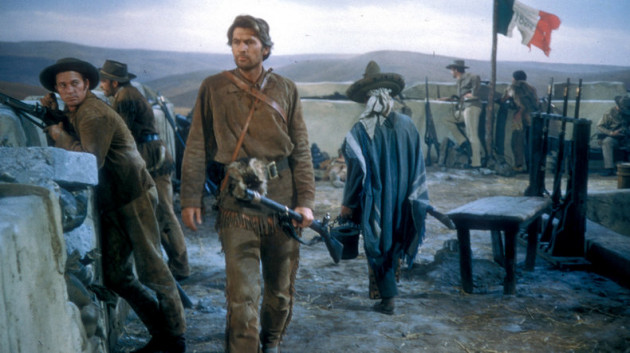 The first act (the most overtly racist segment of the film) has Davy and his bud joining up with General Andrew Jackson to fight off the rampaging Indians (a fun little contra-comparison would be to pair up this sequence, highlighted by Crockett and Georgie giving good-natured winks to each other as they fight off lots of howling savages, with the startingly lurid, Lucio Fulci-like presentation of the slaughter of the innocent Indians presented by Ralph Nelson with 1970’s Soldier Blue), while the second act becomes a bit more sympathetic to the surviving Indian folk, with Davy now presented as a sympathetic ear and American spokesman, fighting for justice for them against the random bad apples, working to get them to join the rest of a noble America (well, Davy, you certainly did your part in hoodwinking them into that, didn’t ya). Joining Congress as well, the salt-of-the-earth Davy delivers an impassioned speech before the educated and idle Senators that had me thinking of a poor man’s Jimmy Stewart going to Washington for Frank Capra… and also reminded me how popular the anti-intellectual/anti-education strain has been throughout American history (usually associated with the Right, yet let’s not forget, while Fess Parker might have been a staunch conservative, Stewart was nothing if not a representative of the Liberal class, pretty good proof over time how the rich educated classes have hijacked the Left/Liberal crowd into aligning with the powerful establishment and impugning today’s Right’s understandable questioning of the corruption of the establishment as some kind of radical sub-mental behaviour).

The concluding segment has Davy, Georgie and they’re new-found dandy river-boat gambler friend Thimblerig (the always engagingly erudite – and gay coded — Hans Conried) heading off to the Alamo to join none other than the maker of the famed knife itself, James Bowie (though history seems to indicate it was his brother who actually made it), played by Kenneth Toby, the actor most celebrated (certainly by me) for starring in all those 50’s giant monster movies that sprang from atom bomb anxiety, and make their brave and manly stand against the attacking faceless Mexican hordes. And, like the earlier Indian siege, impressively staged.

So “Davy” might literally be overflowing with pro-American Cold War propaganda, there’s something appealingly naïve and charmingly fresh about watching the whole venture. Way to go, Davy! Fight off those injuns! Knock down those Senators a peg! Give your life at the Alamo to protect Texas! I’m in!