The continuing ‘documented’ adventures of the always inappropriate, entirely narcissistic middle manager David Brent (Ricky Gervais), whose deep-seated incompetence eventually lead to his painful undoing at the end of the two year run of the original British show “The Office” (the one that the long running, far inferior American series was based on). Fifteen years after his firing and now a sales rep for a bathroom supply firm, mostly selling tampons (entirely oblivious to the fact that he’s making everyone uncomfortable with his offensive female hygiene jokes), Brent remains convinced he’s destined for bigger and better things as a musician (despite his clear lack of even a modicum of talent) and decides to hit the road, with another camera crew following, as he pays for his band Foregone Conclusion and crew with money straight out of his pension.

“The Office” remains perhaps the greatest experience I’ve ever had with any television series up to this point, so it was with a fair level of excitement that I finally sat down to catch up with Gervais’ David Brent and, while, this relatively brief 97 minutes didn’t allow for the breadth of experience that the original series provided (which, as with many British shows, was written and designed specifically for the two year run it lasted for), watching Gervais perfectly inhabit this cluelessly culturally and socially tone deaf character yet again, as he twists into all sorts of self-justifying explanations on why the band has him ride in a separate car behind their road bus and why he has to pay them to even have a drink with him during the tour, is comedy gold.

Watching Brent perform to dumbstruck audiences his self-important, pandering and misguided songs about Native Americans in which he comes up with lyrics both offensive (“Oh, Native American, soar like an Eagle, sit like a pelican”) as well as directly off Google the night before (“Don’t call us Indians, we’re more like West Eurasians crossed with Siberians”), while pushing the only black band member to prance about in Native American garb (because he’s the closest thing the band has to an Indian), and, in even more supremely hilarious fashion, about the handicapped (that includes a typically ridiculously self-aggrandizing introduction about not making fun of the handicapped by Brent that is priceless) is pure pleasure. 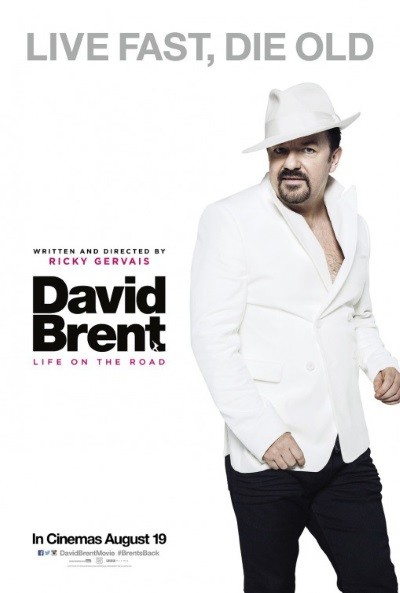 A big part of Gervais’ genius with his Brent creation is how he takes this shallow, self-promoting ridiculous buffoon who I would likely despise in real life (and think most people would — then again, I recently witnessed on Facebook, after someone provided a valid and insightful thread comment on how a post was actually negative towards Native Americans and not the positive celebration the original post-er thought it was, instead of acknowledging the truth of this, the original post-er astonishingly shushed the commenter as he only ‘wanted positive thoughts’ on his page, while at the same time, even more gob-smackingly, did it while self-describing himself as an ‘uber lefty’.. and, even worse, he got a series of determined ‘likes’ for doing it! I mean, Ricky Gervais couldn’t have imagined an incident this nihilistically clueless and despicable) and imbues him with just enough sympathy around his desperate quest to be adored to make him not only likeable (unlike the Facebook Nazi I mentioned and all his likers) but as even an ultimately tragic figure. So much so that, in the series finale of “The Office”, with his mask of self-denial torn completely away, leaving him openly begging for his job (fired due to ‘redundancy’), it becomes almost too painful to watch. Brent’s culpability is obvious, yet his pain is close.

A fellow Brent fan reminded me of something I forgot; that in the follow-up Christmas special episode to “The Office”, Brent is granted some happiness. It’s the same in the conclusion of Life on the Road, with him back at his sales job, his musical tour having been an utter flop, yet still yearning, and finally engaging with the middle aged, usually ignored but sweet office woman who has remained enamored with him even though he barely has noticed her (she doesn’t work with his self-image, of course). Okay, now at his lowest, she’s one of the few left who will continue to enable his self-delusions is likely the sole reason he’s decided to engage with her at all, yet, eh, they still look sweet together. Despite the fact that the guy’s life is a series of endless car wrecks (well, funny ones, in this case), all brought on by his own pathological neediness and inability to accept who he is, it’s still somehow feels good to see him finding a moment of tenderness.

Life on the Road is a worthy addition (curiously maligned by critics when it came out) to the continuing saga of the desperately deluded David Brent and I’d happily catch up with any further entries in the saga if Gervais chooses to give us more. On top of it, as hilariously offensive as those David Brent songs are… they’re also really catchy.