Having recently jotted down my meandering musings on the admirably grisly and enjoyably inspired original “Omen” trilogy (and that’s including the diminished returns by the end) and readying to embark on what I was quite sure were the likely underwhelming dual remaining entries on the bluray box set (namely, the fourth instalment, a made-for-television sequel which suspiciously came a full decade later and the 2006 remake, which sank like a stone upon its release, with even star Liev Schrieber admitting he did it for the paycheck), imagine my surprise, after some casual google searching one night, to discover that there was an actual A&E television series following our favorite Antichrist Damien Thorn. Figuring the time may never be right again… I dove in.

It’s twenty something years later, and 30-year old Damien (Bradley James) has done his best to leave behind all memories of his tragic past growing up in the US Ambassador Thorn household by becoming a war photographer in turmoil ridden cities like Syria… that is, until he heads back to New York (ie, Toronto, shot in a way that looks absolutely nothing like, nor evokes even the slightest flavor of, the Big Apple) where he begins having terribly uninteresting CGI-fueled visions that you can’t imagine anyone thought were actually scary, and — with the help of do-gooder best friend Amani (Omid Abtahi), who is so thoughtful he gently weeps with grief at the death of a girl he slept with once, and the hottie sister (Megalyn Echikunwoke) of his ex-girlfriend (it’s a good trade off, trust me) who is desperate to understand how exactly her sister died (with Damien a bit reticent of telling her he wasn’t able to save sis from being devoured by some mud demons) – begins confronting the terrible truth of who he is, why he’s got those three digits in his scalp, and why exactly those two shady, powerful executives Ann Rutledge (Barbara Hershey) and John Lyons (Scott Wilson) keep following him, with a building trail of bodies following behind.

I should have known, considering not I, nor anyone I asked, had heard of it. I mean, we’re talking about a horror series based on the “The Omen” franchise here (well, just the first actually… it does that annoying thing, familiar to anyone who has followed the narratively all-over-the-map “Halloween” franchise, of willy-nilly — and, dare I say, rudely — dropping the sequels as if we’re just supposed to pretend that, you know, they never happened)!

It takes just five minutes in, with its opening on an obvious production set that’s supposed to be war-torn Damascus (though they did their best with the cameras madly swishing all over the place, using that by-now tired convention of changing-the-shutter-speed that way too many uninspired hacks rely on in a bid for insta-immediacy, an effect that should never be allowed in a horror movie looking to create atmosphere, or actually much of any movie at this point), in which the complete lack of creative spark that permeates the entire show makes itself abundantly clear.

From the casting (including blonde and boring Damien himself), with all those soft-minded, hard-bodied, vapid LA-style lookers, playing characters stuck in those false ‘liberal’ perspectives, actors who give the sense of much time at the gym, yet little in life (even if the ‘gym’ part does have its advantages… did I mention the hottie sister played by Echikunwoke?), walking about in all that inorganic, bad lighting doing a terrible job at aping a ‘noir’ feel (a weird affliction of far too many a Canadian show), to the lazy directing and shooting… is this show bad. 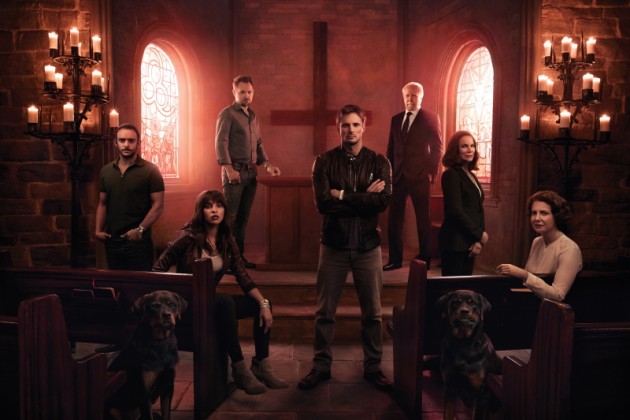 There are visions that don’t really make any coherent sense (I’d give them points if they looked cool or created an impact… alas… none of that’s the case). An angry cop who happens to be homosexual (with the brown friend, the black hottie interest and the gay cop, if nothing else – and there is nothing else — the show is certainly marking the boxes off the diversity checklist) obsessing over Damien, convinced he’s up to something, has his adopted son suddenly whispering evil things to him for no reason that makes any narrative sense.

Never mind the atrocious, cheap-looking, slickly-empty opening credits sequence that comes at about the five minute mark every week, made all the worse when I realized I was gonna have to sit through it nine more times (my OCD requires I watch the credits sequence for each episode – in fact, I deeply dislike that many shows on streaming services and bluray allow you the option to skip them now – though I have to say, man, was I tempted to fight the OCD on this one… naturally, I lost… but I tried). With meaninglessly slick city shots, warped with digital demonic like images flowing into it, it honestly feels on the level of some kid fooling around having done it on his home computer (over, no less, a terrible dumbing down of the Goldsmith chanting score, putting a sort of lame, attempted scary electronic beat under it).

Speaking of the credits, I noticed Glenn Mazzarra, he of everyone’s favorite zombie show The Walking Dead, was one of the showrunners. While I’ve pretty actively disliked TWD‘s overall morally reactionary tone and celebration of the status quo (at least for the first five seasons I’ve watched with my daughter so far), all within its faux ‘liberal’ characters, I realized what makes that show palatable is that it at least is shot interestingly enough, with nice directing and some juicy gore deaths (even if they’re running their course at this point), adding at least production competence to cover up its ideologically shallow positions. No such luck with Damien. 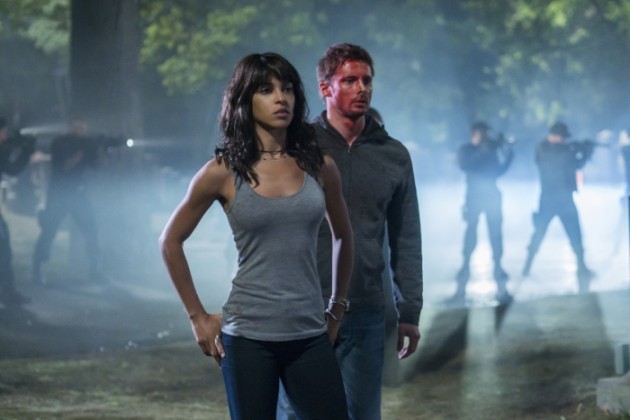 Ultimately, Damien is a supernatural suspense show (in which Damien starts to question whether he isn’t the son of Satan after all, and that the mysterious Ann had the numbers tattooed into his scalp)… you could see Mazzarra and the producers imagining some kind of Supernatural, or WB-style show, with one of those horribly bland group shots of all the slick looking youthful hotties as the advertisement. Sensitive Damien always feels bad when he is driven to do something mean (like beating someone up, who usually deserves it anyway), always staying on the side of safe with the characters (rendering them entirely uninteresting).

Vets Hershey and Wilson, two wonderful character actors in their own right (with the late Wilson providing one of the better performances as the religious, upstanding Hershell during his stint on The Walking Dead) do their best, playing the shady evil guys pulling evil strings from behind the scenes, but are offered very little to play with here, other than a lot of pretending at sinister. 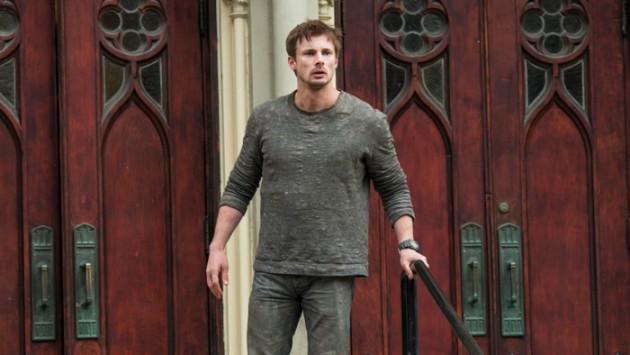 Damien is a vapid show run by creators who either lack talent, or are simply satisfied with the worst kind of empty mediocrity. I really struggled to pay attention through the last few episodes, my mind wandering off, with things like wondering how seemingly creative bottom-feeders like Mazzarra manage to make it big (no surprise, a little google shows the guy is one of those staunch ‘activists’ for gender equality and diversity…he may suck as a showrunner, but he knows how to play the ‘liberal’ part… gee, just like the actors in the show).

No surprise, the show came and sank like a stone, with only completist fools bothering to look at it at this point. Thankfully it’s done now, and I can move on to…
Oh. Omen IV.

Worse case, it’ll only rob me of 90 minutes from my life, unlike the 9 hours or so of soul-sucking boredom Damien gave me.