That cute little tyke Damien Thorn (otherwise known as the Antichrist), now orphaned after the harrowing failed attempt on his life (Seven Daggers of Megiddo and all) by his Papa Bear at the end of the first instalment (with Daddy left shot and dead on the church diaz) has grown into a precocious 12 year old (Johnathan Scott-Taylor), raised in the lap of uber-luxury by his loving industrialist uncle (William Holden) and his second wife (Lee Grant), sent off to military academy with close cousin Mark (Lucas Donat); as the death toll mounts and these unsettlingly mysterious, handsome older white men keep clandestinely whispering to him about his importance, Damien begins to realize his power… and grapple with understanding the dark triumphant path he has been chosen for (it’s not every kid that’s born of a jackal, after all)…

After sharing the shivery pleasures of the original “The Omen” at the Quad Cinema in New York with my 15 year old (Jesus, man, how did that happen?) daughter, I figured — why not — with the concluding image of the evil bugger, now safely ensconced with his unsuspecting new parents (namely, the President of the United States and his wife, a fun idea which the film unaccountably drops for the second film handing him over to the uncle) and looking well on his way to growing up into the ‘world of politics’, turning directly to the camera and displaying a malevolent grin (followed by that wonderful, classic chanting Goldsmith theme to close out the credits) fresh in our minds, why not go all the way and rock this thing out with the entire trilogy (and perhaps even the later, fourth television entry, and even the remake — as bad as likely are, they are in the box set I bought).

With the whole Antichrist set-up ready (and the rules set), and a clear-eyed understanding of its role as a bridge film to the ultimate confrontation (with the producers apparently intending the whole enchilada as a trilogy after the wild success of The Omen), Damien: Omen II starts off in fast-paced form, with a chanting theme from Jerry Goldsmith that isn’t just a reprisal of the original, but charged up into a new more pulse-driven version (one that, I admit, I find myself bopping to every time I hear it… and gives me the need to point out – a big reason, amongst more than few, for both the immediate and long-standing success for the “Omen” films rests in large measure on Goldsmith’s memorable devilishly-inflected suspense music), with archeologist Bugenhagan (the crazed-eyed unforgettable Leo McKern, reprising his part from the first film, uncredited yet again, I’ve learned) racing about some Middle Eastern archeological dig (hey, if it worked well for the prologue to The Exorcist, why not throw it in an “Omen” film!), jumping confidently into its role as, well, really, a quite satisfying and well-crafted body count film (ie, someone suspects Damien’s identity, that someone gets nastily killed, another someone obstructs Damien and his minions’ biblically-forecast evil machinations, that ‘another someone’ gets whacked, and so on until the very last explosive death sequence that takes us triumphantly on into the young boy’s future).

While some of the set-piece deaths are admittedly tame, there’s just enough cleverly inspired ones right up there with (if not surpassing) those in the original (and that’s while remaining impressively light on the blood and guts quotient) to keep the whole thing energized and going; to name just a few, I’m talking the eye-gouging crow attack (with the black bird replacing the rottweiler from the original as the harbinger of Satanic death) on the nosy lady investigative journalist (she might as well have worn a placard saying ‘reign down Satanic death here’ with that job description) that ends with, let’s just say – trying not to give it totally away — a mighty big roadside ‘splat’, the absolutely brilliantly achieved drowning-under-the-ice sequence (that finishes on a impressively experimental, masterfully composed extreme wide shot mimicking a freeze-frame that isn’t really one) and the special-camera-slowing-down-the-action moment (the one unabashed and sensationally presented gore moment in the film, having it repeat from different angles, as they did with ol’ David Warner’s head slicerooni in the original) that seems to be directly channeling the inspiration of Dario Argento’s bravura beheading sequence in Four Flies on Grey Velvet.

You’d never guess it was a problematic production, with the original director getting replaced during the shooting (with the great Mike Hodges, director of two noir-ish films I deeply adore – the classic original Get Carter and the later Croupier — supplanted by the far inferior though capable journeyman Don Taylor); there is a smooth consistency to the proceedings, punctuated by great cinematic flourishes, including Damien’s introduction in a wonderfully orchestrated moment, the camera moving in a way to give the impression of the boy emerging from the flames of burning leaves (apparently the length of time it took for the determined artist Hodges to capture this stunning shot was one of the many reasons “Omen” trilogy-guiding producer Harvey Bernhard decided to fire him… and replace him with a likely far more malleable filmmaker). 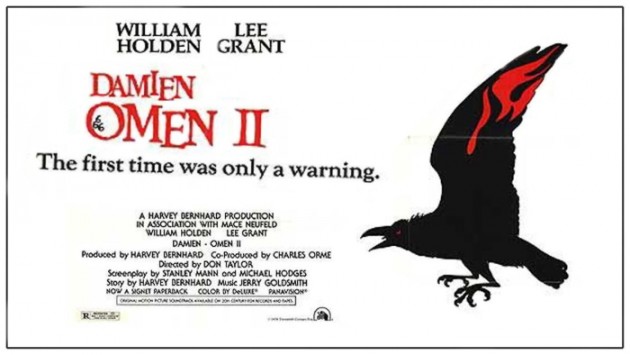 While the acting is first-rate throughout, including long-time vets William Holden and Lee Grant matching up in similar parental roles no problem with Gregory Peck and Lee Remick from the first film, I have to hand it to Taylor-Scott; he may not have gone on to do much else… but this much is true (whether his mom agrees or not), he was born to play the son of Satan.

Not only does the chubby-faced boy, with the severe black hair cut and eyes that turn from expressive to coldly blank, and back again, on a dime, look startlingly like he would be the adolescent that the tyke from the first one would grow into, he is capable of exhibiting an almost surreal air of superiority and regal confidence which belies his youth, while also early on managing the conflicting mischievousness, adolescent innocence and confusion coming with coping with the fact that he happens to be the Antichrist; why he’s so good in the part, I can even overlook the unaccountable English accent (when the rest of the family he grew up with is American).

If I have a misgiving, it’s minor (and the fault of the filmmakers, not the actor) in that I don’t understand why they just didn’t give him an apple cart to stand on so he didn’t come across as short as he obviously is when standing in row with the other cadets in a few scenes. While the concept of him standing apart as short does work in a clever literary way (‘The thing that stood out right away about the Thorn boy was how short he was.’)… at the risk of offending Thee Protectors of the Vertically Challenged… I find it kinda odd cinematically.

It’s a mild oversight and far from kills performance… and scenes such as the one where Damien begs his cousin Mark (with Lucas Donat also doing some wonderful thesp work) now in the know of who Damien really is, to join him or else, is beautifully performed, with both able to really reach emotional depths that help raise the film to a quality it might not have attained without them… and makes the tragic conclusion of the scene that much more painful… and harrowing (yet admirably bloodless… not that, as anyone who has read any of my musings knows, am I against copious bloodletting by any means, it’s just when a film has the confidence and capability to pull off violent deaths without? Gotta give them some kind of props, no?). 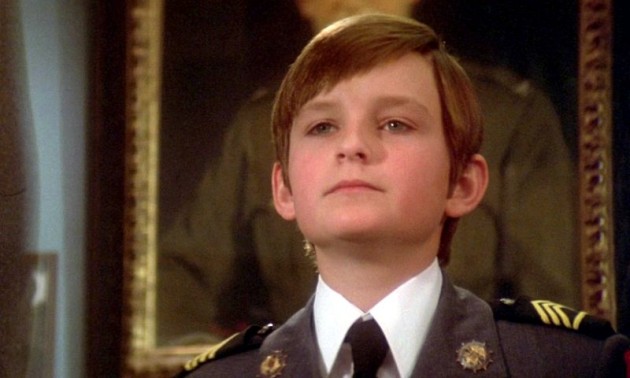 Now, as I hinted at all the way at the beginning, with the film being the tale of a young boy spending his formative years, on the cusp of full-bore adolescent horniness, in the all-male confines of a military academy (I mean, that in itself should clue anyone in to where this is going), guided by a cabal of secret older men who keep exchanging furtive glances at parties where young women are allowed, with Damien finally taught by them who he is, ultimately running to the end of the doc in horror and screaming “Why me?!”, the homosexual subtext of the film is pretty obvious. I’m not saying the film is the second Elm Street film, which could have been subtitled Freddy’s Gone Cruising, but when the moment of Damien’s terrified realization of who he is, finding the 666 mark on his scalp as he stares in a mirror (check out the history of cinema, folks – when a guy spends a long time looking in the mirror, pre-sexually fluid days, that is? He’s at least likely a bit of a tweener… per Marlon Brando’s uptight Major in Reflections in a Golden Eye) is met immediately by one of his young cadet counterparts coming nude out of the showers in a towel, causing the boy to rush off in denial… it doesn’t take a rocket scientist to put together the pieces here.

Enlivened by some clever murder set-pieces (hell, I didn’t even get to mention the delectably darkly comic one with the trains slamming together) and engaging performances, my daughter and I agreed Damien: Omen II was a worthy follow-up to the first, admirably managing to work around the fact of being hampered by the demonic cat already being out of the bag this go around.