Two spoiled Czech vixens named Marie (Jitka Cerhová and Ivana Karbanová) faced with a world spinning out of control into war, decide their best course of action is to face off against bourgeois civilized society with its own tools – pure indulgence and decadence. 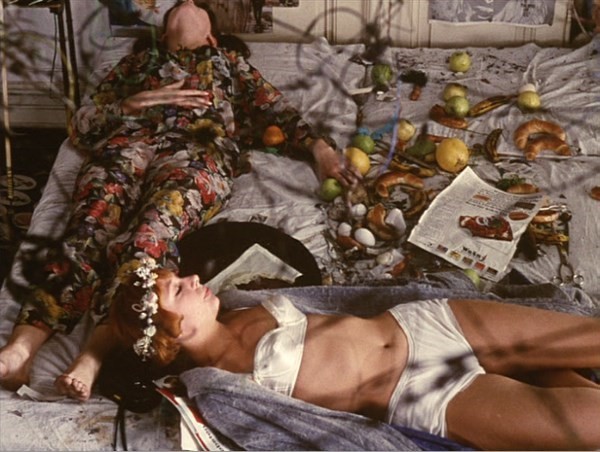 Another oddball entry (that I’d never heard of before, which is was a big reason I didn’t wanna miss it) from that admirably irreverent chick duo behind the DeuXX film series that’s found its way over to the trendy new theater in Montreal’s Mile End hood (where they let you take your drink with you into the theater – always a plus, in my book), Cinema Moderne, Daisies is shot in a wildly hyperactive and experimental manner, with scenes chaotically falling into each other (switching haphazardly between black and white and color, with all sorts of cinematic tricks going on), as the girls frolic through their amusing journeys, such as repeatedly picking up older wealthy looking men who treat them to smorgasbords of food (massive food consumption, while not on the order of, say, Marco Ferrari’s La Grande Bouffe is one of the grotesqueries director Chytilová loves wallowing in in the film) before the Maries, soon growing bored (and realizing expected sex is on the horizon), manage to goad each of the clueless guys onto the next train out of town (though occasionally ending up stuck on the train themselves, waving goodbye to their elderly confused john standing on the platform), crash a posh 1920’s-style nightclub and cause chaos, and find various other indulgent adventures to stumble upon (such as getting dunked in water like witches after coming upon a huge feast set up in an empty warehouse, where they eat all the food and destroy the entire place, chandelier and all). 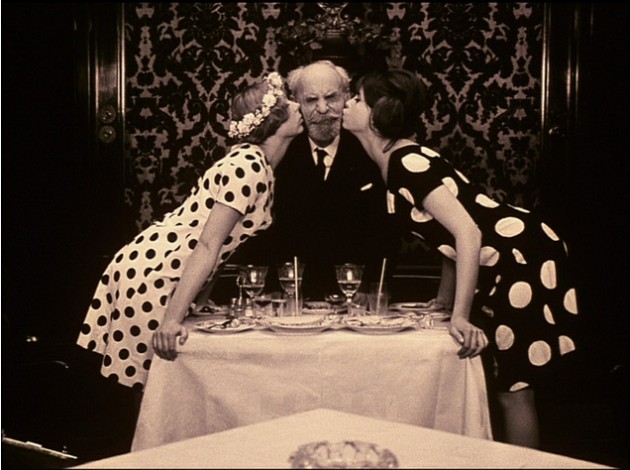 Apparently a milestone of the Czech New Wave (like the French New Wave, it was led by a number of bold, experimentally-minded auteurs moving away from the established norms of the film industry, representing a shared international epiphany in which youth fighting back against the repressive adult political systems was what mattered most), while I can – and do — admire the 76 minute cinematic smorgasbord Daisies for its whimsical style (with crazy moments such as having the screen suddenly fragmenting as the Marie’s cut it apart with scissors) and underlying political underpinnings (with its ironic presentation of female ‘indulgence’ being a key to feminist victory), yet, at the same time, from today’s perspective, in which the ruling mode of consumerism has molded its entire base (including many of those who believe they’re rebelling) into creatures of narcissism and self-involved indulgence, it becomes harder not to see this perspective as, at the least naïve (and counterproductive to any real societal change), and at worst, one of the systemic problems.

Overall, though, glad I saw it, if simply to enjoy on the level of cinematic fun, and another worthy entry in the DeuXX series!