The Short and Medium Length Films of Humberto Solas

Humbert Solas was born in Havana in 1941 (or 1942). With a political conviction which he would never lose, he joined the 26th July movement, which promoted armed struggle against the Batista dictatorship, at the tender age of 14. He studied history at the University of Havana, but had dreams of being an architect. However, when ICAIC was formed after the revolution, he decided to be a filmmaker, and he was able to gain entry into the institute by making his own, independent, experimental short, La Hulda (1959), at the age of 17! Initially, he worked as a writer for ICAIC’s Noticieros and the film series, Enciclopedia Popular, for which he was able to direct a film, Casablanca in 1961.

In 1962, Humberto Solas co-directed his first “real” film with Hector Veitia, entitled Variaciones. Surprisingly experimental, it begins with the camera moving over objects from the colonial past and then intercuts a theatrical performance with an architectural construction —revealed to be a new Cuban arts centre. Thus a concern for both performance and the space in which it occurs is demonstrated in this early film. His next film, Minerva traduce el mar, co directed by Oscar Valdes, while being equally experimental, is all the more remarkable for being shot in cinemascope and for having no apparent political purpose.

In his book, The Cuban Image, Michael Chanan notes that the French nouvelle vague was a big influence on “apprentice” Cuban filmmakers of the period, and that could certainly have been the case with the twenty year old Solas. In Minerva traduce el mar there are “poetic” echoes of Truffaut’s Jules et Jim (1961) through the interface of stylized, widescreen compositions and camera moves with a natural setting, and in particular, the play of live characters around a seemingly ancient statue. Minerva traduce el mar is staged on the edge of the sea, on an abandoned promenade adorned with ruined Romanesque columns and a bust of Minerva. Presumably we are in, or close by, Havana, yet the film’s actual location is never revealed to us. We are given just an elemental setting of water and stone in an era that is indistinguishable other than clearly being a “time past.” Two dancers appear. The woman is Afro Cuban and is masked like Columbine, while her male counterpart is dressed as Pierrot. Thus characters from European pantomime and comedy appear, fused with African symbology in an ancient arena. A second male character enters the scene and a stylized fight/dance is enacted between the two male figures. All of the action is choreographed to the strange and complex poetry of Jose Lezama Lima. As Paulo Antonio Paranagua suggests, “play and choreography, life and dance, fuse” together in Minerva traduce el mar. Solas would later dismiss this film as a “naive experiment,” and yet the beauty of its widescreen compositions and cinematic rendition of figure movement mark the director’s sophisticated feeling for style and prefigure his later work.

In 1963, Solas co directed another short film with Valdes, entitled El retrato (The Portrait). In some ways it is even stranger than Minerva…, though it does have a semblance of a narrative: an artist gains inspiration from a woman whose image he sees in a painting. (In Cinamateca de Cuba’s Dictionario de Cineastas Cubanos, 1959-1987, El retrato is listed as a “fiction” short, whereas Minerva… is called a “documentary”!) El retrato, is, ultimately, less interesting than its predecessor, but with the 27 minute El acoso (The Pursuit), a solo effort, Humberto Solas really came into his own.

The story of El acoso is very simple, and the film contains virtually no dialogue. An escaped mercenary from the defeated invasionary forces at Playa Giron kills a black man and takes his clothes. He invades a shack by the sea, and rapes the (black) woman who lives there. We gradually realize that she must be the wife of the man he killed. The mercenary flees, and the end of the film finds him alone, isolated in a desert like, mudflat wasteland. Each shot is beautifully composed, and the landscapes are memorable. The house by the ocean is built on flat barren land reminiscent somewhat of Ingmar Bergman’s Faro island, or the desolate location of Godard’s Les Caribiniers. The human figures also stand out against the stark backgrounds and they are framed to give them classically heroic —the Afro Cuban victims— or tragic —the Cuban American mercenary— status. As well, in two shots, the sense of confrontation is heightened by deep focus compositions, where one character is viewed in the extreme foreground while the other stares back from the midground.

El acoso was made with a view to including it in an anthology film containing other fictional shorts. Michael Chanan notes in his book on Cuban cinema, that about twelve of these shorts were made (including Minerva traduce el mar and El retrato) but that only three were eventually combined in a feature on the guerrilla war, Cuba 58 (1962), two directed by Jose Miguel Garcia Ascot and one by Jorge Fraga. (Presumably the idea began with the three episode Historia de la revolucion directed by Tomas Gutierrez Alea in 1960.) In any event, El acoso revealed that Solas was well suited to the short fictional form, especially when the subject was that of revolutionary struggle. Indeed, in 1966, the director made what many consider to be his finest film, Manuela: another fictional short on the guerrilla war, that was intended to constitute one third of an anthology feature.

Manuela is a mulato guajira (peasant woman) who is transformed into a revolutionary guerrilla. The film begins on a shot of Manuela’s prone body —a flash forward, perhaps— and immediately we are shown her mother being killed and her house razed. Shots of the burning dwelling are cross cut with Manuela’s rapid flight through the jungle. She finds the rebel forces and they put her in uniform. Like Solas’ previous films, there is little dialogue in Manuela, and more than ever, the film’s visuals convey its message. For the first time, the cinematographer Jorge Herrera worked with Solas, and it shows. Throughout Manuela, the audience is totally engaged in the action, especially through the dynamic use of the hand held camera, which simultaneously transports the viewer emotionally and projects the sense of immediacy one finds in newsreel reportage. Herrera’s camera also projects the physicality of the jungle setting, brushing past foliage, while alternately capturing the sun’s blinding rays and rain’s drenching power.

Manuela is also remarkable for introducing to the Cuban screen the vivacious campesina Adela Legra as Manuela and Adolfo Llaurado as Mejicano, a handsome young, guitar playing rebel soldier. So successful was this pairing that Solas teamed them up again as the young married couple in the third part of Lucia. Manuela is most lyrical during the couple’s idyll, but the heightened sentiment is balanced by Manuela mocking Mejicano’s lack of survival ability —she teaches him to wash clothes. However, in the climactic battle, where the rebels have to confront a tank, Manuela takes up arms and is slain. More spontaneous than Mejicano, Manuela had wanted to kill their prisoners, captured earlier, but dying in his arms, she tells him not to do this. The enemy’s aggression transforms her into a revolutionary soldier, but love, and the subsequent mutual education it provides, help to form her revolutionary conscience.

In its dynamic combination of documentary like and passionately dramatic, black and white cinematography, Manuela stands as the stylistic prototype for the mature Cuban feature of the late 60’s and early 70’s. Humberto Solas and Jorge Herrera worked successfully together next on the highly acclaimed Lucia. Significantly, perhaps, although Lucia is a feature, it combines three shorter films in its anthology structure, allowing Solas to demonstrate his mastery of the medium length form. And, in 1974, Solas made yet another striking medium length film, Simparele. 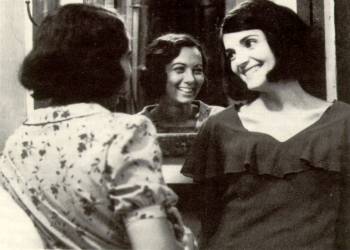 As the director himself says, Simparele was “a total departure for [him], a break with the past.” It features Martha Jean Claude, a Haitian singer, exiled to Cuba, who appears as the storyteller, the muse and a participant in the stylized action of the film. Simparele consists of a choreographed, highly stylized and somewhat Brechtian restaging of Haitian history. It is certainly not a “documentary,” although many statistics are provided on the sad state of Haiti at that time, as well as photographs and newsreel footage of “Papa Doc” Duvalier and his regime. The script was written by Solas in close contact with Martha Jean Claude, on whose life some of the scenes were based. It was the director’s first attempt at making a colour film, and clearly he incorporated the use of colour very centrally in the film’s “text.”

Simparele begins on a close up of Ms. Claude, illuminated by a red light and framed against a black background. She says that “Haitians should scream,” at which point a cut is made to a polar opposite image. The camera tracks out with her, framed now inside in a white room. The background is so bright, the filmstock appears to be overexposed. She wears red and becomes surrounded by black men wearing red, white, or yellow. Here, the cinematographer, Livio Delgado, seems to be rendering the rich colours of the costumes in high contrast with the stark backgrounds, similarly to Jorge Herera’s black and white cinematography for the first part of Lucia. At the end of the scene, historical figures including Toussaint L’Ouverture call for revolution, triggering a switch to an outdoor locale, rich in green foliage, and a passionately moving camera, apparently responding to the call. Again, the style corresponds to that of Lucia, but here one finds other materials introduced into the film’s fabric —naive paintings illustrate Claude’s narration; she begins to recite poetry (functioning as a muse); and African mythical characters (e.g., Ogun) interact with the historical and fictional ones.

The mood changes drastically with the failure of the revolution, wherein the screen is flooded by red and yellow gels, invoking Dante’s Inferno. Fragmentation of the action with actuality footage and stills and titles breaks the spectators’ emotional engagement, but the intensity is carried through by the use of red titles on white backgrounds, and by the horrifying nature of the data displayed: e.g., Life expectancy —30 years; Unemployment —60%; 15,000 Haitians massacred at the border. The operatic nature of Simparele increases with the acting out of this disaster, and the editing becomes positively Eisensteinian in contrasting colour amongst other graphic elements. But, the film ends on a positive note, with Martha emerging out of the darkness to call for solidarity and armed struggle against the continuing reign of Haitian dictators.