“Do you believe in God, Streiner?”
“I believe God is a sadist… and doesn’t even know it.”

It’s the last year of the war and, as Germany is steadily losing, a platoon of hard-nosed, yet desperate German soldiers, led by the heroic, authority-defying Sergeant Steiner (James Coburn, who may be at least twenty years too old in the part but is so good, I just rolled with it) remain on the front lines fighting the Russians.

Following a brilliant opening montage credit sequence of stock war footage blended almost seamlessly with narrative footage, starting in black and white and slowly moving to color (all over the wonderfully dichotomic sound of children singing a German folk song), Peckinpah doesn’t take a breath before immediately dropping us directly in the middle of the brutish destructive chaos of the battlefield, deliberately allowing no immediate moral judgement, or good guy to cheer for (or bad villain against), brilliantly utilizing the director’s signature (always powerful) muscular editing style (slow motion mixing with normal speed, tanks shooting massive cannon fire mashed with close ups of random men stabbed by bayonets and shot to death). It’s a harrowingly violent ballet of death, one that plays out again and again throughout the film. It’s the kind that the brilliant Chinese filmmaker John Woo would directly riff on in his own startlingly breathtaking work a decade and a half later (if in slightly more morally comforting terms); yet, where Woo’s work had a slickness and cleaner sensibility, Peckinpah’s is dirty, grittier… and more noble in its perspective on the common man.

It’s no surprise that Peckinpah waits for a massive explosion to freeze the frame and give us his director credit (freeze frames, slow motion, quick zooms – he certainly loved to play with all the self-reflexive tricks that cinema had to offer, another of the many arguments why he should be considered ahead of his time); it’s the kind of aggressively defiant ‘that’s right, motherfuckers!’ statement that the hyper-confrontational Peckinpah loved to throw in the face of the critics who dismissed his work as simple-minded and violent (with possibly the greatest example being the freeze frame director credit following William Holden blurting out ‘And if they move, kill ‘em’ in the director’s universally acknowledged masterpiece The Wild Bunch from 1967).

Along with a through-line similar to many a great anti-war film, of ambitious, hubris-filled higher officers who care nothing for the men who serve them (represented by Maximillian Schell’s Captain and his desperate need to obtain the titular Cross of Iron for bravery, even if it means blackmailing fellow homosexual officers or maneuvering to have his own field soldiers killed), Iron also is episodic in nature, first following the platoon’s ultimately tragic efforts as they hide a young Russian soldier boy, disobeying the orders that he should be shot by the coldly ambitious new Prussian Captain Stransky (Schell), then on to Steiner’s stay in a hospital after he’s wounded (with some audaciously experimental imagery and cutting styles effectively presenting the hallucinatory effects of PTSD on Steiner), through Steiner’s return and the platoon’s successive capturing of a group of female Russian soldiers who end up using their sexuality against the young horny men (including an eye-wateringly sensationalistic scene of male dismemberment right up there with Wes Craven’s video nasty Last House on the Left from 1972). 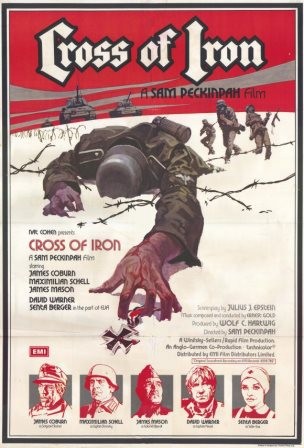 One of the master strokes of the film, that allowed Peckinpah to get away with a lot more critical perspectives on the lunacy and atrocities of war, was setting it amongst a German battalion (which I kept forgetting – especially with Coburn struggling with a German accent to the point it sounds more like an Irish brogue – though why these characters would be speaking English amongst themselves with German accents is a bit confusing anyway) fighting the Russians. They may be Germans, but ultimately it’s clearly a presentation of soldiers everywhere… and the barbaric atrocities of war that cross national lines.

While Peckinpah’s perspective is certainly (and profoundly) anti-war, there is also, as always in his work, an underlying celebration of the heroic, anti-authority male figure. While his view may be muscular, and even patriarchal in nature, there’s a startling emotional quality that jumps out in moments, reverberating because of their sparseness, as if the men, repressed by war and their own destructive impulses, are desperate to share intimacy. There’s a great moment when one of the soldiers suddenly breaks down during a birthday celebration, crying and pouring his beer all over the cake, until his compatriot, not sure what else to do, stops him with an intense, long kiss directly on the mouth. It’s unexpected and jarring, more powerful because of it. Peckinpah himself was apparently a deeply conflicted man in his own life, consistently positioning his own aggressive masculinity to the fore while yet also struggling to express intimacy, and that inner conflict is clearly – and powerfully – presented in his work.

While his better known (and more celebrated) films such as Straw Dogs and Bring Me the Head of Alfredo Garcia can be argued to be stained by misogyny, I would also point out that the hateful streak we see in them is not a simple one. There’s a complex desire there, with the expression of his male characters’ constant yearning to overcome and connect being one of the key elements that make him a fascinating filmmaker and not one by any means to dismiss. 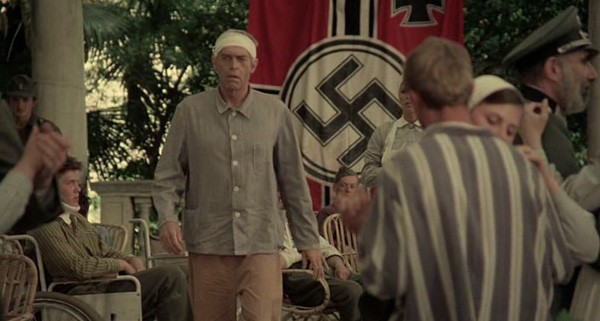 I don’t see his position as a celebrated, though underappreciated filmmaker changing much in today’s climate, but perhaps that is kinda fitting from a director whose films, from his very first Ride the High Country from 1962 (now that is one underappreciated masterpiece), about male outsiders who don’t fit in anywhere, yet yearn for a moral connection (“I just want to enter my house justified”, says Randolph Scott).

Cross of Iron’s mind-blowingly audacious ending, with the continuous laughter of our hero played over the closing images of stock footage of horrific war and death (before returning, even more powerfully, to the German children’s folk song), it brought to mind for me the closing statement of Tobe Hooper’s whoppingly important 1974 The Texas Chainsaw Massacre in which we’re left with the silent Leatherface wildly swinging his forever churning chainsaw as the now-insane Marilyn Chambers shrieks with maniacal laughter… only Peckinpah’s ending speaks to defiance and a kind of nihilistic triumph, while Hooper’s final vision is of madness and ultimate meaningless. Either way, they’re equally profound visions… and deeply challenging.

No surprise, while European audiences felt a historical connection to Cross of Iron’s profoundly bleak, anti-war perspective and flocked to see the film, Americans were too busy being wowed by the dazzling big budget opening studio salvo that’s led to the deliberate audience infantilization of today (otherwise known as Star Wars) to notice. 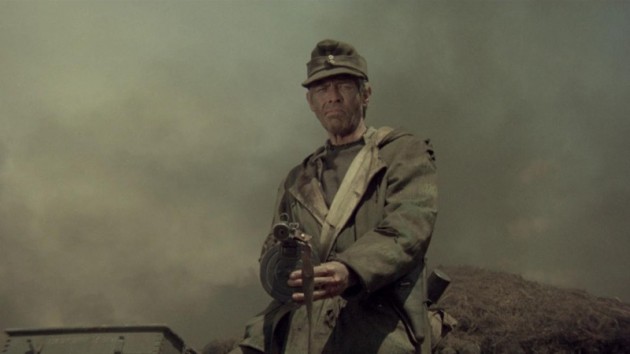 Along with the eye-opening experience of the film itself, a lesson that came out of the screening for me had to do with the medium itself. Faced with all of the muddy browns, blood reds and dark greens swirling around in the film (and the potential for a less than rewarding visual experience it could have caused without the proper transfer or projection), I was really stunned by how gorgeous the film looked. While I’ve always appreciated it as a medium, I had no idea that 16mm could quite look this beautiful.