Nelly (Inga Landgré), a naïve 18 year old small town girl, waking up to the power of her beauty as the local men eagerly fawn over her, finds herself torn between the quiet staid country life she shares with her adoptive mother Ingeborg (Dagny Lind)… and the seductive charms of the big city, represented by the sudden arrival of her manipulative biological mother Jenny (Marianne Löfgren), who had left fifteen years before in a cloud of scandal, and her much younger, sleazily charming cad of a boyfriend Jack (Stig Olin).

With Crisis being his directorial debut, it’s interesting to watch the 28-year-old cinematic neophyte (and eventual master of the form) Bergman struggling with translating his theatrical experience and studies into filmic terms. A lot of Bergman’s iconic stagings are already forming (with things such as faces in the foreground and background, each looking off, rarely ever facing each other reinforcing their isolation and emotional imprisonment, as well as the actors’ physical contortions of emotional pain while delivering painfully aware confessions), yet, much of it feels a bit stiff, not fully confident (not surprising) and a bit too dramatically overdone (even for Bergman, which is a line he will toe – I say brilliantly and almost entirely unerringly once he hit his stride, which would be only a few films after this — all his career, which is why he’s always been ripe for parody). For instance, the arrival of an old man ‘death’ figure who appears out of nowhere to hover over the concluding tragic events is a particularly awkwardly mishandled attempt that Bergman will handle often and with much greater mastery throughout his career to come.

While he works hard to wring emotional pain from each character, the story (adapted by Bergman from a radio play) of the restless young girl (a striking 19 year old Landgré, who I couldn’t help but jealously ponder over if that notorious lothario — of the storm un drang type — Bergman had charmed into the sack) and her struggle between the repressive, yet ultimately good values of the country and the indulgent excitement of the amoral urban landscape, based upon his later often obsessive focus on the internal raw emotional landscapes of his characters (and that includes even his great comedies), I can’t imagine it being a tale Bergman was particularly attached to. 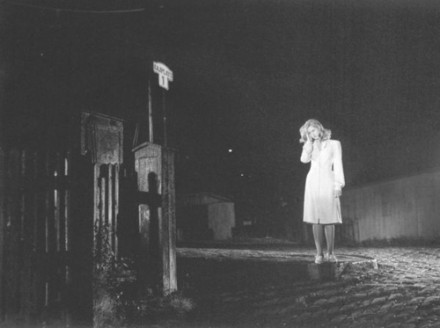 The film isn’t a sexual free-for-all (by any means), but there is an overall maturity to the handling of the sexual material, not surprising as these Swedish films of the time were already way ahead of their American counterparts. The score of the film is terribly annoying —redundant and overt, everything that Bergman would later reject as ‘barbaric’. The lighting grows darker, more noir, the deeper the tale moves into the destructively manipulative workings of the city and it’s well done (if admittedly simplistic with the perspective of the entire film).

The actors do their best, with Löfgren’s manipulative biological mother, working her character’s cruelty and desperation in ways that render her unlikeable, yet understandable and perhaps the most interesting. Her redemption is well played (though the eventual triumph of the small town idyll is a bit trite… the type of easy resolution that Bergman would move far away from in his career… other than with the exception of the otherwise brilliant The Virgin Spring from 1960, a film whose ‘Sign from God’ moment at the end the director himself would eventually be embarrassed enough by to disown the film).

A saving grace of the overtly didactic moral philosophy is there is at least some painful questioning by the almost saintly, now terminally ill adopted mother, leading her to realize that her determination to keep the young Nelly safely at her side all these years may not be purely motivated by altruism, but perhaps by underlying selfishness.

I always enjoy seeing members of Bergman’s troupe showing up, even ones like Stig Olin, who was around a lot in the early first decade of Bergman’s career only to disappear entirely from the work. Though I don’t necessarily find Olin’s Jack character’s demise at the end believable, as it feels more an easy way to condemn the city indulgences as destructive (Jack may be lecherous and vapid conman, as he himself is aware, he’s also filled with a genuinely vibrant defiance), I could still see the appeal it held for Bergman – if there’s one thing close to a Bergman character’s heart, after all, it’s self-annihilation as a means to end the cruelty. 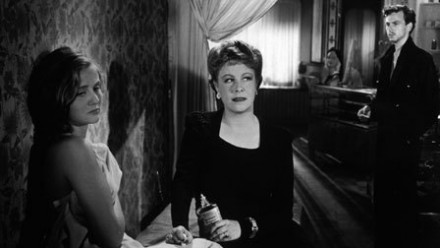 And don’t think I didn’t notice that little un-credited cameo by eventual Bergman stalwart Gunnar Björnstrand (his dominant position as the spiritually despairing Pastor Ericcson in Bergman’s later masterpiece Winter Light from 1963 will forever be seared into my psyche) as a man reading a book on a park bench who has a final concluding conversation with the now-content (even as she faces her demise by illness) Ingeborg.