“Even though she is a sweet-natured girl, she’s a total fucking freak!” (Ant Timpson on Kier-La Janisse) 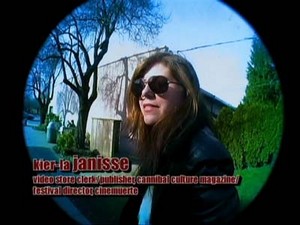 In my Fantasia festival report of 2003 I wrote about “an engaging” low budget documentary by Ashley Fester entitled Celluloid Horror. The subject of the film was a frequent attendee of Montreal’s Fantasia International Film Festival, festival programmer (and film writer/scribe) Kier-La Janisse, who returns to the 2009 edition of Fantasia as their official “Web News Editor,” which means festival goers will be able to read Kier-La’s critical reaction to select Fantasia films, as well as interviews. Celluloid Horror provides an insider’s look into the fertile mind of dynamo Kier-La Janisse, who single-handedly, and against all odds, started Canada’s first all-horror Film Festival, Vancouver-based CineMuerte, which ran for six editions between 1999 and 2005. Although the film is aimed at the tried and true horror fan, Kier-La’s infectious enthusiasm for all things horror, and her single-minded see-the-show-through-at-all-costs determination will win over anyone with a weakness for the underdog. Consciously or not, the notion of the underdog forms a sort of structuring device for the film, as we see Kier-La take on the Vancouver Censorship board, greedy distributors, an indifferent media, and unheeding government funding bodies; we also hear her talk about her troubled childhood and witness the quick deterioration of her marriage. But not all is doom and gloom, as Fester includes interviews of friends, festival guests, and festival goers who offer words of encouragement and heap praise on Kier-La’s festival and her dedication to the cause (including Udo Kier, Jeff Lieberman, Jorg Buttgereit, Mitch Davis, and Buddy Giovinazzo). The documentary also includes many film clips from CineMuerte screenings that validate Kier-La’s inclusive (of what defines horror) programming philosophy (Possession, The Isle, Nekromantik, The Moor’s Head, Cannibal Holocaust, etc.). This is anything but an ‘objective’ documentary because the director’s admiration for Kier-La shines through loud and clear, which is easy to understand if you’ve met Kier-La. Four years after its theatrical release, director Fester has independently released Celluloid Horror on DVD through Reel 33 Releasing company. One thing is certain: the same energy and enthusiasm that Kier-La brought to her projects is visible in the DVD release of Celluloid Horror. According to Fester, the cost of the DVD’s production was three times the average. The version on the DVD release is a slightly different cut of the film, eight minutes shorter than the version shown at Fantasia, but with different material and longer film extracts. Fester has also edited a 43 minute cut of the film, with the aim of a potential television sale. Along with the film, there are loads of special features, including a director’s commentary, an episode of a local Vancouver interview show, Urban Rush, featuring Udo Kier and Kier-La Janisse, over 30 minutes of extended scenes and a nice photo gallery of special guests at CineMuerte. The real treat for people who buy the DVD will come when they crack open the actual DVD box –a surprise which I won’t spoil. I’ll only say that, according to Fester, the feature is so unique that the Canadian and US Patent offices are considering the device as a new invention. Once inside the DVD cover you’ll find post card size reproductions of the six CineMuerte posters, which have select bios on the back, along with the nicely designed DVD. A small price to pay for such packaged obsession. Breeder Productions.