An earthquake in the (I believe California) desert releases en masse a previously unknown, deadly strain of fire-spurting cockroach and while it appears the world will be safe as the bugs reveal an inability to procreate above ground, the increasingly obsessed entomologist Professor James Parmiter (Bradford Dillman) has other plans on his mind…

Mucho thanks to Phil Spurrell (of local Cinéclub Film Society fame) for lugging over his projector equipment for a 16mm screening night of quality efforts from those legendary schlockmeister of yesteryear (and today, as one of ‘em’s still kicking), producers William Castle and Roger Corman, before a small eager group of us in my darkened loft.

And while the Corman film, Von Richtofen and Brown, turned out to be the classier film of the night (and exceedingly well directed, proving that, along with his Vincent Price-starring Poe adaptions, when Corman decided to add directing duties to his usual producing ones, he was more than just capable, he was right up there with the best of his genre peers – but more about that in a later post), the William Castle produced and written Bug had more than its plentiful share of pleasures to offer in its own right. 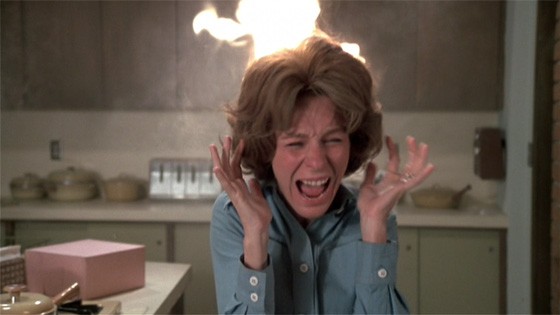 The film gets it going almost immediately, right after the opening of the film, with the Dillman scientist dropping his wife off at church (he doesn’t join in, instead casually dismissing her weekly need to go, establishing early on an underlying theme of science vs. religion that plays out incompletely – though still interestingly – and which I’m guessing was much more developed in the novel the film was based on, which was part of the horror paperback boon of the 70’s, titled The Hephaestus Plague which I now have to get my greedy little fingers on sooner rather than later) as the massive earthquake hits, obliterates the church and opens a huge fissure in the ground.

Some relatively nasty burning alive deaths of a few unsuspecting humans (and a poor kitty cat) ensue as the unleashed critters do their damage and we’re off. While the first half is well done and gripping enough as the small town characters start figuring out what exactly is going down here, what really separates the film (and elevates it) from the rest of the pack is the second half’s unexpected narrative movement into insular and claustrophobic territory. Turning away from the standard creature feature of the small group huddling together with a shared commitment to wiping out the threat to humanity they face (hey, I love those too), the film becomes this weird character study between the increasingly megalomaniacal scientist and the new species of super-bugs he suddenly desperately decides to save from dying off (I guess that’s what happens when you reject the good Christian God and want to know what it’s like, in the proclamation of that famous fictional Doctor Frankenstein, writhing in sheer ecstasy at having conquered death over life – and who shares a few sociopathic commonalities, which I’m sure weren’t accidental, with the entomologist herein — ‘be God!’). 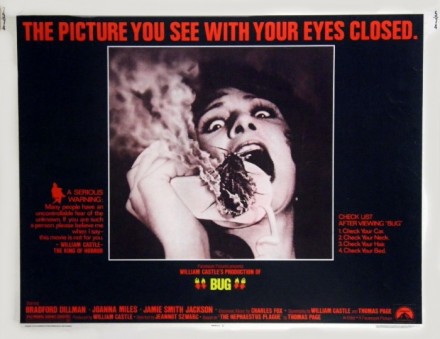 Easily shrugging off his wife’s gruesome death (having been burned up in their kitchen, which, once I was told, quickly became apparent, was the television Brady Bunch set!), Dillman’s Parmiter hunkers down in the abandoned farmhouse next to the fissure and begins obsessively studying and experimenting on the destructive roaches… seemingly bonding with them on such a level that he begins trying to find ways to get them to procreate (which ultimately leads to the buggers becoming so unexpectedly smart they begin communicating with Parmiter by moving their bodies together to form words on the wall – though to get to that point, it requires the awfully dense Parmiter to keep forgetting to close that damn lock on the box he keeps the captured ones in, letting them escape as he sleeps).

While the character could have used a bit more development to believably get him to the crazed emotional place he arrives at (again, I’m suspecting the book had a little more to offer there, another reason I’m excited to get into it), Dillman’s increasingly wild megalomaniacal performance is still pretty stunning (it’s also helped along by some really evocative high-key lighting and sweaty makeup – I mean, he looks insane by the last act). While I’ve always liked the actor and appreciated his efforts in lots of genre faves (such as the kind-hearted doctor fighting to protect the futuristic apes in Escape from the Planet of the Apes to his hero role in Piranha), I didn’t know he had something like this in him, with really powerfully crafted moments such as his character breaking down, laughing in bitter irony while at the same time weeping tears of despair, conflicted between triumph with his bugs coinciding with his quickly eroding humanity.

With its sparse moody desert setting, wonderfully evocative experimental electronic score, focus on a scientist moving past moral boundaries in his obsession with the increasingly hyper-intelligent deadly bugs he is theoretically combatting, the more and more hermetically sealed narrative movement, and the nicely ambiguous conclusion, all ambitiously wrapped in the genre trappings of a monster movie (the film certainly isn’t afraid of deliciously exploiting the squirm factor of having these large cockroaches crawling in the hair and the body of their unsuspecting victims), Bug reminded me quite a bit of the far more highly regarded scifi horror intelligent-ants-species-taking-over-the-world Phase IV (only less trippy) which I’d seen on the big screen just a year or so ago. While not as heady as that brilliant film (and also having a few unconvincing moments of actors with the attacking cockroaches, as they shriek and run about yet frustratingly never do the obvious of just simply knocking the fire-spraying buggers off their face!), it’s certainly a worthy companion piece. 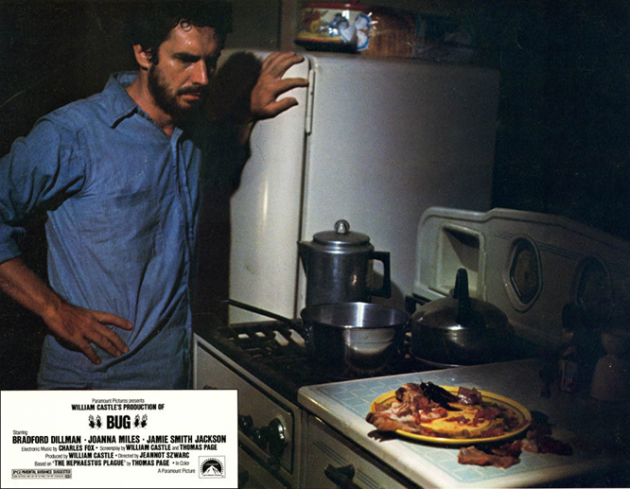 They even both use micro-photography to get closer to the bugs (though, to be fair, while the creepy moving cockroach images in Bug are effective, Phase IV dwarfs it — and any other film I’ve ever seen using that technology for that matter – as far as sheer ambition of the ant photography, remaining a mind-blowing ‘how the heck did they get those little insects to do that?’, in which the ants seem to literally be following story directions).

With the intense Bug (only his second film), the high-flying and wonky Supergirl (a film that should be treasured for the sheer chutzpah it displays in the face of such wrong-headedness), the far-better-than-it-had-any-right-to-be sequel Jaws 2 and even the romantic not-so-bad time-travelling drama Somewhere in Time to his credit, I’d say director Szwarc could stake a claim as an underrated genre filmmaker. I’d sign the petition.

A nice quality effort, as well, for producer William Castle as his swan song.