The first season following that one time naughtily cute kitten of a slayer (I say ‘one time as her attire from Season One has, as a fellow male Buffy traveller stated so succinctly to me, gone from ‘titillation’ to Season Two’s ‘sophistication’, to which I can only assume, for better or worse, Ms. Gellar gained some control over her character) and her Scooby Gang managed a nice balancing act between the comedic and the absurdly horrific, mostly by introducing a monster-of-the-week that would, along with creating the kick-ass action and excitement, provide some well crafted insight into the difficulties and painful realities of treading teenage high school life. Season two, however, while still adhering somewhat to that episodic nature, added a few continuing characters, including an evil vampire couple, the insane Drusilla (who is played in seriously creepy fashion by the great and recently late thespian guru Martin Landau’s unsettlingly famished looking daughter Juliet) and the hundred year old blonde quaffed (physically playing off Buffy’s dark haired vamp lover with a soul, Angel) English baddie Spike, a new and decidedly annoyingly overeager vampire slayer Kendra (anointed as such at the moment of Buffy’s momentary death at the end of Season One) and the good guy rock musician (and part time werewolf) Oz, who is so intensely sensitive in his relationship with Willow I don’t know whether to admire him or roll my eyes.

About halfway through the season the show does lose a bit of excitement as it begins to seemingly reach a sort of standstill as far as character and relationship development (though, to be fair, my daughter’s enthusiasm never waned), but developments in the last 1/3 of shows began to not only ratchet up the tension with the machinations of Season Two’s Big Bad (none other than Buffy’s initial love interest, Angel – called Angelus, once you remove his soul) and the reluctant alliance of Spike with the Scoobies, but in fact, lead to an intensity not previously achieved at all on the show before, with the surprisingly painful deaths of some major characters creating a genuine stir of sorrow (perhaps a bit too much for my daughter, who was shocked by how sad that last episode was… but I say “Hey, man, that’s the way it goes… c’est la vie!”). 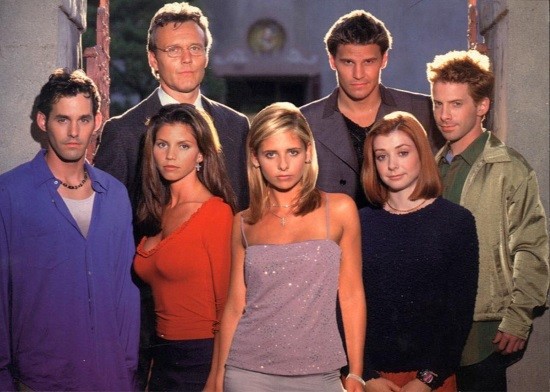 One thing I never expected though (which either speaks to how successful the show is at dealing with its even more cheesier elements… or how much I’m allowing my daughter’s pre-teen perspective to influence me), was my feeling that high school superstar Cordelia — I know, she’s superficial and definitely could stand to learn a little humility — is not being treated particularly nicely by Xander. And me and my daughter, well, we just don’t like it.