The World is a Prison

You shall call a fine film the one that gives you an exalted idea of the cinematograph.’ (Notes on the Cinematographer, p. 21)

Master precision. Be a precision instrument precision myself. (Notes on the Cinematographer, p. 3)
A Man Escaped is the first Robert Bresson film I saw. I saw it in college, where I felt like a prisoner. I identified with the central character, who dreamed of escaping from his prison, because in this film, as in many Bresson films, there is a prison.

But if Bresson uses prisons it is to talk about Liberation (just like we often talk about death to better understand life, as in Denys Arcand’s Barbarian Invasions). Each of these liberations or dreams of liberation are also diverse incarnations of the grand theme of Liberty.

Briefly stated, A Man Escaped (1956) is about a prisoner (Fontaine, played by François Leterrier) who succeeds in conquering his liberty. The title announces it: a condemned man….escapes. It is practically a distanciation technique and forces the spectator to become interested not only in the finale but in how the escape is produced. This is where Bresson’s art of narration and description is strongest. 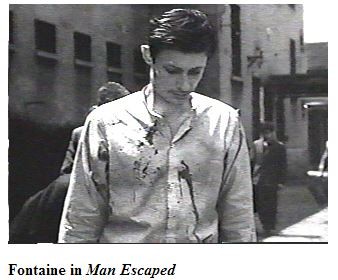 In a review of this film André Bazin concentrates on the singularity of this “how”: how will a prisoner who dreams of escape conduct himself? Again, the collegian prisoner in me found this idea marvelous.

In seeing the film again after nearly thirty years I realized that I had forgotten practically all of the historical references: the German presence, the important World War 2 context, the French Resistance, etc. All that I remembered was the images of a man who wanted to escape and regain his liberty and dignity. Because in fact history is in the sound (the noises) and in the conscience of Fontaine; and also because the setting (film set? location?) is stripped of ornamentation.

However, I did clearly remember the film’s opening image: a close-up of Fontaine’s manacled hands. Just like there is a network of prison images in Bresson’s films there is also a network of images of hands in nearly all of his films (or as the scholar may say, a paradigm of hands). Especially in Money (1983), and a great deal also in another film which forms a sort of diptych with A Man Escaped, Pickpocket (directed immediately after A Man Escaped). Bresson said of Pickpocket that he wanted to do a film on the “intelligence of hands.” This could equally be said about Money or A Man Escaped. 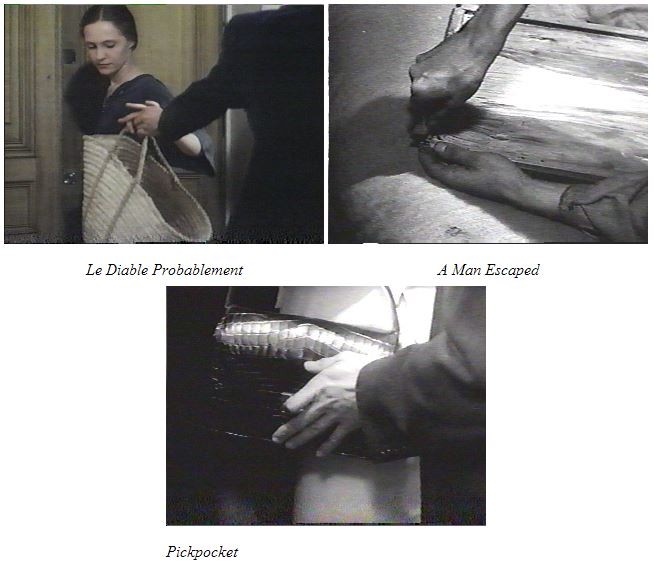 From the first scene in the film Fontaine wants to escape, be free. Later the removal of his manacles becomes a fundamental gesture. Once his hands are freed Fontaine says, “I felt a sudden sensation of victory.”  Fontaine, who wants to free himself, requires all the resources of his hands. With his hands he is better able to exploit a variety of objects which become the instruments of his liberation. The price for this liberty is precise and methodical physical labor.

This precision of gestures is partly the function of André Devigny’s memoirs. But the film’s images amplify the precision use of hands. Which is why Bresson can film a series of close-ups of hands without ever intercutting a shot of Fontaine’s face. This is a choice which fits in with the Bressonian sense of a non or anti-psychological approach, of an “anti-cinema.”

We watch what a person does to be free, to escape. And we learn what we can do. What we can do with our own two hands. A popular expression says, “Play of hands, play of villains.” Fontaine is effectively a villain, but a villain in the same sense as Michel in Pickpocket or Yvon in Money. To be a villain is to be abnormal, anti-social, especially if we delimit the social: society as prison.

For Bresson, however, there is not only the physical aspect of hands, as well as prisons, but a spiritual signification. The film’s subtitle (or second title) suggests it well: “The Wind Bloweth  where it Listeth.” Herein rest the film’s moral and philosophical implications (or as Bazin, Agel, and Ayfre would have said in their day, the ontological implications).

The following phrase recited by a priest to Fontaine comes from the conversation between Christ and Nicodemus in the third Chapter of the Gospel According to St. John.

Il vous faut naître d’en haut Le vent souffle où il veut tu entends sa voix, mais tu ne sais ni d’où il vient ni où il va Ainsi en est-il de quiconque est né de l’Esprit.   Marvel not that I said unto thee, Ye must be born again. The wind bloweth where it listeth, and thou hearest the sound thereof, but canst not tell whence it cometh, and whither it goeth: so is every one that is born of the Spirit.

Behind the physical aspect of Fontaine’s hands is what we normally call the ‘Hand of God.’ For Bresson, to liberate oneself from this particular prison is to be liberated from all forms of prisons and pursue his destiny.  But one must be enlightened, must have their Road to Damascus, and, above all, must have patience. Orsini (Jacques Ertaud) was not patient. We learn of his death as the priest recites the above text from the Gospel of St. John. And yes, it is true that the “Wind Will Bloweth Where it Listeth”, like the breath of a Spirit.

On the question of filmic language Bresson, like Fontaine, likes precision. His frames are highly fragmented. His shots are tightly framed, an almost Eisensteinian style which states a preference for synecdoche: the part representing the whole. In A Man Escaped the framing of a door, partially closed (or opened), renders an even greater sense of entrapment. 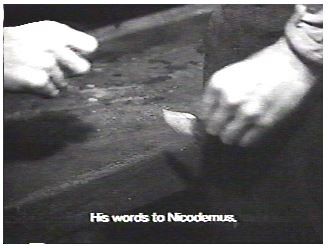 Images and sounds like people who make acquaintance on a journey and afterwards cannot separate. (Notes on the Cinematographer, p. 21)

In terms of music, we hear Mozart’s Mass in D minor each time the prisoners leave their tiny cells for a little bit of space and liberty in the prison yard. Washrooms and buckets filled with excrement are emptied to the sounds of Mozart (and there is a beautiful Schubert sonata played for a worn-out looking donkey in Au Hasard Balthazar). And we hear it in a slightly different variation played during the escape. Everything belongs. Religious music for a religious gesture, for a ‘transcendental’ style, as Paul Schrader would say. Here we have, once again, cinema as an art of encounter -and of contrast.  In his Notes on the Cinematographer Bresson talks about the mysterious events which occur during a film shoot. A little bit like the Existentialists, Personalists, or Phenomenologists, Bresson believes in chance event and the unexpected.

Now that A Man Escaped has become the last Bresson film which I have seen, after being the first in my life as a cinephile, I plainly see that Fontaine is Bresson, or Bresson is Fontaine: headstrong and determined as he leaves a prison. For Bresson, to be obstinate, inventive, and fearless (like Fontaine) consists in escaping from the world of cinematic convention (circa 1956).

Bresson states (in the opening quote) that a filmmaker must work at being precise. But his heroes do the same, through manual labor (if cinema is defined as an artisinal practice). The extreme close-ups of Fontaine’s hands reveal to us a concrete intelligence (as a film is made starting with small, concrete decisions). This concrete ‘manual’ intelligence is what allows Fontaine to be master of his destiny. Just as it permits Bresson to be the master of his film and a grand master of cinema.

I know today, even more than yesterday, that all filmmakers who bear some interest owe something to Bresson. And A Man Escaped, like his other films, demonstrates why.

I read an earlier modified version of this paper in the context of the Cinémathèque québécoise’s 40thAnniversary, where members of the Quebec Association of Film Critics (AQCC) were asked to pick and introduce significant works of cinema. I wanted to present Bresson because ever since the day I saw Au Hasard Balthazar my vision of cinema changed. I had the proof that cinema could really be an art, something which, sadly, does not happen very often……