It’s a year after the events of Sam Peckinpah’s brilliant anti-war opus Cross of Iron (1977) and the German Sergeant Steiner (Richard Burton, looking even more absurdly ancient than the already far too aged James Coburn from “Cross”) and his two surviving platoon buddies continue to fight on the front lines, as well as against the lessening morale around them in an increasingly losing war. Only this time, against Steiner’s own direct superior’s back, Steiner is ordered by high command to secretly engage with an American Corporal (Robert Mitchum, looking entirely indifferent in his role) to surrender the German forces after a coming clandestine assassination of Hitler is carried out. 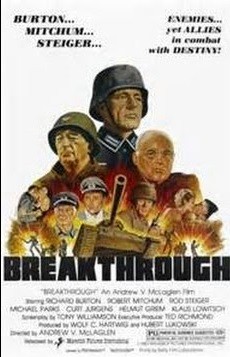 While Breakthrough may at first appear to be a serviceable, if mediocre war film in its own right, looking at it in context as a sequel to Cross of Iron, Sam Peckinpah’s deeply personal (in its brutal, existential celebration of the Defiantly Nihilistic Man) masterpiece, filled as that film is with a grandiose sense of intimate brutality and little moments of almost maudlin sentimentality, it’s hard to see Breakthrough, with its purely functional filmmaking style (it’s mostly wides, medium close shots and masters, functionally capturing the action with little attempt at perspective or emotion) and lack of any real empathy with the characters, as anything else but a dismal affair. There is little vision (or caring for) what was set up so powerfully by Peckinpah before; not that, by any means, it had to follow Peckinpah’s existential perspective – why, even the counterbalance of a rousing Hollywood war film by the likes of a filmmaking vet such as John “The Great Escape” Sturges could have been interesting – but give us something!).

Burton and Mitchum sleepwalk through their roles, clearly showing up for the paycheck. Burton relies on the severity of his famous voice and popping his eyes open really wide once in awhile to conceal the fact that he isn’t bothering to create any further internal life for that unforgettable Coburn and Peckinpah creation from “Cross”. The power chord electrical guitar licks saved for almost each time Mitchum saunters onto the scene are particularly inappropriate (just one part of a generally overbearing score). Steiner’s eternal nemesis, the arrogant and ambitious Captain Stransky is back, still desperately seeking the Iron Cross for bravery no matter what the cost (even if it means killing his own men to get there), but unfortunately, as played by Helmut Griem, he is nothing but a one-note hand-wringing villain (worse yet – that we feel indifferent towards) managing none of the charisma Cross’s Maximillian Schell imbued in a character so repulsively oozing with arrogance and hubris.

There’s some decently coordinated large-scale battlefield scenes, with roaring tanks and bodies flying about, but without anywhere near the impressive scope of some of the great Hollywood nationalistic war efforts like Battle of the Bulge (1965), or the visceral brutality of the Peckinpah film, or even the perverse crueler pleasures of the lesser Italian exploitation combat movie efforts, with the likes of snake-faced Klaus Kinski slinking about, that the Italians churned out in the 60’s and 70’s. Breakthrough is a terribly middling affair. 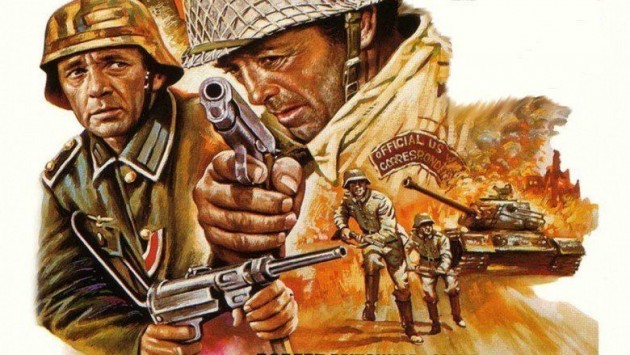 The introduction of the “good” Americans (even if Mitchum’s Corporal seems incredibly dim-witted for such a celebrated officer, casually waltzing himself and his aide, played by a young Michael Parks, unnecessarily into danger again and again, only to be saved by Steiner) was perhaps an attempt by the filmmakers to draw in the American audience that rejected the first film, but also immediately dumbs things down, creating the nationalistic edge that was refreshingly lacking from the first. And, anyway, did it work? Does anyone really remember this film?

Experiencing the antipathy with which the filmmaker and actors approached Breakthrough, and the seeming disregard for Peckinpah’s massive achievement with Cross of Iron, it all began to remind me a bit of the experience Richard Stanley had with his Island of Dr Moreau, a film from which he was fired and replaced by John Frankenheimer, and the way everyone simply stepped all over and shat on the visionary Stanley’s vision, which led to the final terrible film… a film which at one time I had enjoyed as a ‘guilty pleasure’, but, after learning the depth of Stanley’s painful voyage and of the terribly wasted opportunities, I now only experience as depressing. Where at least Peckinpah got to make his film (even though, true to the defiant wild man Peckinpah ways, he violently clashed with the producers), the sequel Breakthrough is made with such mediocrity, lacking any reverence or understanding of the importance of his film (while at the same time having such potential with that headlining cast), it’s a cinematic crime. And kinda depressing.