On a cross-country joy ride of ‘new beginnings’, Jeff (Kurt Russell) finds himself flung into a nightmarish search for his kidnapped wife Amy (Kathleen Quinlan), as part of a shakedown scheme led by the initially helpful trucker Red (J.T. Walsh), who took her after their car broke down at the side of the road.

With our everyman hero fighting to get back his attractive wife, battling against those tough redneck hold-outs against civilized society (with them brooding about in their massively imposing and seemingly invulnerable trailer trucks, while Jeff has his cute new Jeep, so fragile that pulling out a few mamby-pamby colored wires from its undercarriage puts it out of commission) while ineffectually trying to navigate the resentments and disrespect towards city folk from the unhelpful community (who likely feel ignored themselves), Breakdown serves as a poster child for the road suspense thriller as terror tale of modern masculinity under attack (with the title so nicely representing not just the obvious plight of our couple’s car, but the underlying threat felt by polite society).

Deep as I was burrowing into the works of the somber existential cinematic masters like Ingmar Bergman and Andrei Tarkovsky, a commercial action thriller such as Breakdown would not have been on my radar when it came out (and if it was, it would likely have been summarily dismissed) but, hey, while I might have been foolish to have ignored it, hey, at least it’s allowing me the opportunity to experience all of its well-crafted and excitingly executed pleasures now, for the first time.

I know little about director Mostow, other than he seems like kind of a journeyman action director (I did find his third Terminator a competent entry in the series), but, man, does he carefully and effectively cultivate the growing paranoid perspective of Russell’s Jeff, as he falls into a terrifying nightmare in which he is an outsider in a back-to-basics world where the strong and barbaric survive and it isn’t even sure the cops can be trusted.

Walsh, as sociopathic ring-leader Red, is maximum deadpan sleaze extraordinaire, delivering deliciously deplorable lines with great understated relish (I know, it sounds like an oxymoron, but with Walsh, it somehow isn’t… at all…), such as, in incitingly describing the disappeared Amy to the frantic Jeff, to prove that he has her, “About 5’5”, 115 pounds, three or four of that just pure tit.”

Major props also to Russell, an actor capable of anti-hero Snake Plissken testosterone-bursting levels, for reigning in his ego and allowing his physical virility to be so downplayed (through his performance and the slightly frumpy clothes they put him in) – until the concluding scenes, of course, when the masculine status quo fears are assuaged, with our hero re-claiming the primal power that the modern world has worked to hollow out of him (in a mind-bendingly awesome scene that ends with Jeff literally pulverizing Red with as giant, and symbolically appropriate, a phallus as can be imagined). 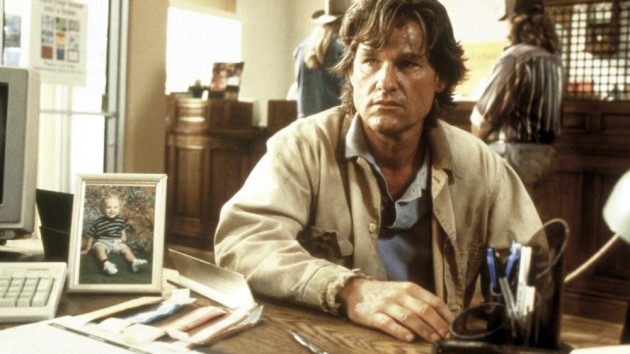 There’s a modern cinematic savvy to the film, speaking to an understanding of cinematic tradition (and love) for genre; it’s a little bit Texas Chainsaw Massacre (with Amy popping out of a cold storage fridge in a farmhouse basement and a family ready to kill for daddy) and a lot part Duel (no explanation really needed there), amalgamated into one deliciously tense ride.

The print was gorgeous (as was the one for the previous entry in this Jammin’ Trucker Anthology series I saw, Every Which Way But Loose) and the big screen was the perfect place to see the larger-than-life action unfold. Definitely gonna take another gander on my projector system at home (especially as I plan on moving soon and not sure I’ll get to see it this large at home again in the near future).