In a cold and wintry Canadian setting, a group of sorority sisters harassed by a series of disturbing phone calls from someone identifying themselves as ‘Billy’ are stalked and murdered during the Christmas season.

I’d seen this film only once before, on VHS back in the day, and I guess I wasn’t paying close enough attention (revealing one of the major benefits of a 35mm theatrical presentation for an always half-distracted plebeian like myself — that being the demand for total attention!) to recognize how truly brilliant this film is. Considered a failed model for film production, the Canadian tax shelter period did, however, produce a ton of interesting genre cinema (amongst a lot of un-releasable dreck as well) and if I had to pick two films (and directors) that made the whole cycle worthwhile, it would be David Cronenberg’s significant leap in maturity, the cinematic exploration of body-horror known as The Brood… and the genre journeyman extraordinaire Bob Clark’s clearly seminal (if ahead of its time by a few years) complex (and far more profound than given credit for) original slasher, Black Christmas.

The ever-present sound of the despairing howling wind, the genuinely disturbing prank call voice (or voices? — I can’t really tell, other than to say it’s genuinely unsettling and freaky — and I don’t freak easy), the creepy POV shots and odd camera angles — and this sickly sense of moral and spiritual decay that hangs over the proceedings (especially infecting the male/female relationships and interactions in the film, which tend towards being, if not outwardly destructive, at the least caustic — even the joke played on the police officer regarding the word ‘fellatio’ by Margot Kidder drips with an underlying unpleasantness) — reveal not only its earlier Italian giallo film roots, but an additional grounding in something psychologically darker and more unsettling. 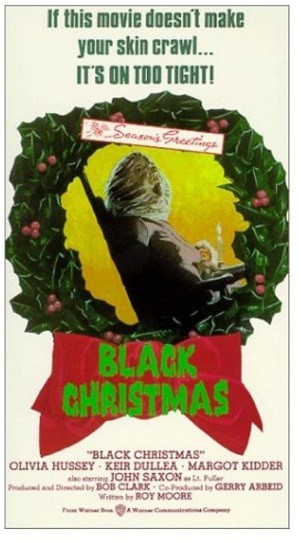 It’s understandable how John Carpenter’s deified slasher Halloween (an obvious and acknowledged riff on Black Christmas) not only won out at the box office, but was embraced by an eager film industry to ring in the era of the slasher film. As brilliant as Carpenter was in creating iconic imagery (and he was), he simplified the tale into easily digestible terms of good versus bad boogeyman (adding in a dash of mainstream conservatism, with the whole sex equaling death and the virgin surviving); Clark’s film, on the other hand, offers a darker, more troubling vision with the mystery of the killer’s identity coloring much of the characters’ actions (be they slasher or not) as perverse and cruel — the nasty drunkenness of the Margot Kidder character, for instance, and the angry Kier Dullea angrily smashing his piano at learning his girlfriend (Olivia Hussey) won’t agree to an abortion.

Carpenter’s film is a comforting parable confirming the fear of the other, with an ending, as beautifully realized and iconic as it is, operating on an ideological level no less propagandist than a 1950’s sci-fi big bug movie. Clark’s, on the other hand, with its more ambiguous and unsettling conclusion, operates as a challenge, exposing the rot and destruction of the violence we’ve witnessed as not bubbling up from some supernatural creature out there, but forming from hostile seeds within. Not exactly the kind of message a young audience looking for easy thrills and chills at the horror pictures was looking for, but certainly a perspective that helps push Black Christmas into the pantheon of great, resonant horror films.