Jerry Hampton, an ambitious female reporter, out of a job after quitting a big city newspaper in a huff over a scandalous scoop she had on a big business mogul the paper refused to print, reluctantly agrees to take on the editorship of a small-town newspaper, where she fights against sexism (starting with everyone in the town having assumed that she’s a man), small town idle behaviour and – what do you know – more corporate corruption… and this time she isn’t take it lying down.

Included as an extra on the Deluge (1933) blu ray, presumably because it also stars Peggy Shannon, the hoped for “It Girl” who never was (in fact, it wouldn’t be long before Shannon was spiralling into alcoholism and mental illness), and nowhere near as lurid as that sensational early disaster epic (or as worthy of re-discovery), Back Page still manages some interesting qualities, most of it stemming from its standings as a pre-code effort. Why, the fact that Sam is a determinedly independent woman working to establish her own career, while also living with her boyfriend (a reporter like her, only a decidedly less ambitious one) in sin, with neither of them even hinting at the idea of matrimony, is just the sort of thing that would get those fighters for religious and moral (i.e. patriarchal) values like the Catholic Legion of Decency up in arms and eventually led to the creation of the Hays commission, a censorship board, to set up shop in Hollywood for almost forty years (until 1968, when, Hollywood returned to really partying it up with the sex and violent fun again). 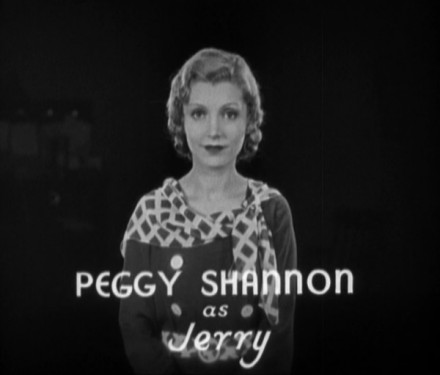 It’s also a pleasure discovering the talents of Shannon herself, an actress I knew little about previous to picking up this blu ray. While it may not be enough to go on, you can see at least a bit of why she was once groomed by Paramount as a replacement for legendary screen icon Clara Bow (who herself had a nervous breakdown from the tremendous demands of Hollywood at the time). She’s beautiful, for one thing, and is capable of an engagingly whimsical quality, with an underlying intelligence, in Back Page. The attempts at humor with her and some of her small-town cohorts falls flat, but that seems more because of misguided direction and writing then anything due to her.

While Jerry’s actions in the film’s happy wrap-up reveal some seriously deficient journalistic ethics (I mean, extortion is extortion, even if its against the corporate bad guys), the film’s all still worth a gander, even if just to notice the relatively innocent (and genuinely progressive) pre-code material that once got all those religious folks’ panties in a bunch. Then again, glance around today and you can marvel at some of the very same things.