“Is the daughter’s tragedy the mother’s triumph? Is my grief… your secret pleasure?”

“There can be no forgiveness.”

A giddy Eva (Liv Ullman) and her vicar husband (Erik Björk) receive Eva’s celebrated classical pianist mother Charlotte (Ingrid Bergman) into their country home after an eight year absence… a visit that soon turns to the darkest nights of the soul, where harrowing emotional confessions and lacerating condemnations built up over a lifetime of regret and blame spew out.

Not only Bergman’s last theatrical film (with the magnificent, epic coda to his career to follow four years later, Fanny and Alexander, actually made for Swedish television), Autumn Sonata was also his final chamber piece – and is right up there with the most emotionally raw and powerful of any and all of them. 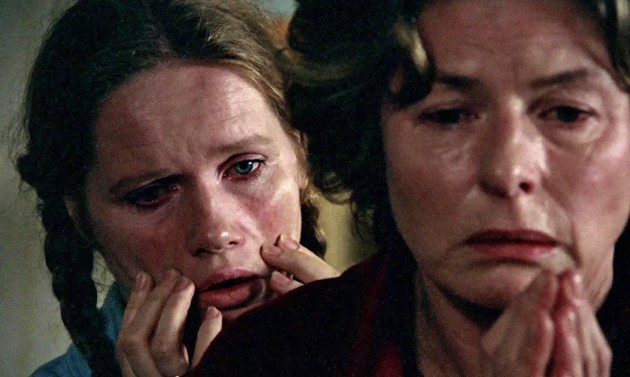 I guess you could argue that Bergman’s chamber pieces are ‘anti-cinema’ or – even worse – boring. He certainly has no truck with the traditional notion of ‘physical action’ defining story and character (in fact, when he has tried to capture more standard physical scenes in his work, it often plays a bit awkwardly). I would counter that the filmic ‘tricks’ he employs, such as those in Autumn Sonata –loading the screen full of emotionally devastating close-ups (narcissistic aside here – in my early filmmaking days, I often tried to replicate that effect in my own short films, but at some point had to accept with a level of grounding despair that I simply wasn’t a cinematic master – ah, perhaps I’ll get another chance to prove ‘em wrong before Mister Bones in a black hoodie and scythe shows up at my door), if not two faces crammed together at emotional and physical cross-purposes, the constant time- and space-freezing presence of the ticking grandfather clock, the in-character actors suddenly turning (theatrically) to the camera (stage audience?) to provide a momentary confession before re-engaging — without a word on the interruption — back into the narrative, the searingly confessional (and always intellectually inclined) dialogue going on for pages and pages, the sparse music interjections – reveal a deeply profound, deliberately claustrophobic, yet entirely vibrant and truthful mastery of the art form like no other (even Woody Allen’s attempts at Bergman-style chamber pieces with September and parts of Another Woman, while good films, pale in comparison). As they say, there’s plenty of ways to skin a cat (or, in Bergman’s case, give a good figurative Protestant lashing) and, man, does he have his own approach with cinema.

There is such an unflinching severity to Bergman’s approach, you could see why some audiences would feel the need to laugh at it or dismiss it altogether. It’s almost too painful to take head on. Watching Ingrid Bergman’s Charlotte, a woman who has run away all her life from anything that caused even the slightest emotional discomfort, finally now forced to listen, in no uncertain terms, to every lacerating detail from the traumatized Eva of the damage her lifetime of neglect and irresponsibility has caused on her children (including the disabled and now paralyzed daughter, Helena, who Eva didn’t tell her mother would be there when she arrived… and who Eva blames Charlotte’s lack of love for her sister’s disintegrating condition) all scene long in devastating close-up is like watching Mel Gibson’s Christ getting tortured for two and half hours in The Passion of the Christ; far more sparse and simpler in style, yes, yet equally as sensational and operatic… and far more truthful, honest… and sublime. I’ve always felt (Ingmar) Bergman’s affinity towards ‘horror movie’ imagery is as psychologically harrowing (as ‘real’ horror is meant to be) and razor sharp as any of the acknowledged masters… and he doesn’t fail to provide a moment here, wherein Charlotte has a dream that feels entirely real, of the paralytic Helena climbing on top of her sleeping form in an attempt to smother her with repulsive physical intimacy (it’s a moment more disturbing than any of the grand guignol found in Gibson’s film, that’s for sure). 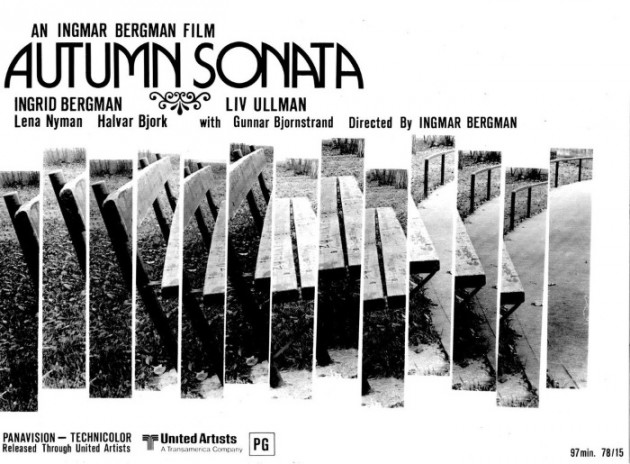 Perhaps Ullman plays her agony a bit too shrill at moments (maybe it’s just me, but even the childish giddiness which she uses to cover up her emotionally stunted self feels a tad forced at times). And Bergman’s (all too frequent) use of disabled characters, not as full characters on their own, but as representations for the underlying spiritual sickness of the real cast, is a bit iffy (if undeniably effective). Yet, it’s impossible to deny the truthful searching for intimacy – and bravery of the performers (this is Ingrid Bergman’s only film with Bergman – and it was also her last – and it’s a triumph, perhaps resonating deeper because of the connections with her own personal situations as a celebrity with children – Bergman wrote it for her after all).

Mother and daughter in the film are exceedingly cruel in the open guilt with which they condemn each other. And yet… we sympathize with them. Eva is so emotionally crippled she can only express love for a drowned four-year old daughter (who, when alive, we get the sense she wasn’t close with) and Charlotte can only run away from it all. Yet, we can see how they suffer for their sins. And, of course, once apart, they each hopefully muse (to themselves, not to each other) about trying again at repairing what there is clearly no chance can ever be fixed.

They both know the truth, though. There is no escape, no hope for resolution. With Charlotte in her comfortable compartment in her departing train, already making plans with her agent for her next big show, she suddenly looks out the window, as if trying to catch a final glimpse of her home – only to find a scared reflection of herself looking back at her. Eva sits alone before the gravestone of her dead child, the morning after her mother has left and delivers her final monologue:

“I can’t die now. I’m afraid to commit suicide, and one day maybe God will want to use me. And then he’ll set me free of my prison.”

My first film professor John Freitas once pointed out to me, with some exasperation, how every male student’s first film is almost inevitably about suicide, reflecting this naïve sturm-und-drang sense of self-importance that they eventually grow out of. Ingmar Bergman, on the other hand, might perhaps be that single filmmaker who not only never grew out of it, but instead matured with that angst-ridden vision, eventually cultivating an entirely brilliant existential career from it.