A donkey, named Balthazar by the young girl who first owns him (the strikingly angelic 18 year old Anne Wiazemsky, at the start of her ascent into a darling of the über-intellectual face of the French New Wave), is constantly sold off or discarded, suffering human cruelties and exploitation along the way, with the few kind moments coming from the same girl (with her also suffering cruelty, often by the very same hands) whenever their lives occasionally intersect. 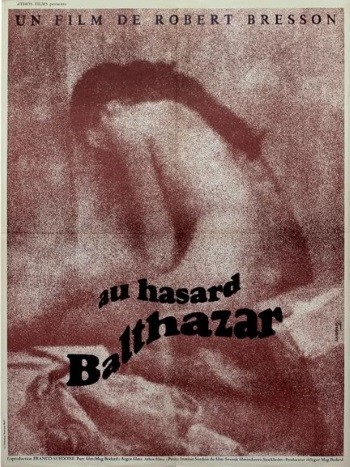 Bresson’s austere, minimalist style — including limiting the (often non-)performers’ emotional responses — is so beautiful in its simplicity, with this Christian allegory of the cruelty of man against the quiet dignity of the animal. The small moments of sadism, the unchanging expression of the donkey, the kind stroking hand of the girl, the quiet moments of reflection — this is transcendent cinema. If there is ever a film that comes closest to realizing some kind of divine concept that God is in the details, this is it. I’ve seen it twice now (the first time was at the Film Forum perhaps 10 years ago) and, while I loved it and recognized the almost ethereal quality to it, what I somehow didn’t experience at the time was how genuinely heart-breaking it is. The donkey suffers for us all. Andrei Tarkovsky is the only filmmaker who, when I experience the majesty of his films, I almost imagine the guy as talking to angels. Well, with this film, in a very different — less overtly grandiose, yet equally palpable — way, I’d put Bresson in that rarified air.