Moctezuma’s Alucardamakes its first appearance on DVD with this release, and does not disappoint aficionados of nuns and possession films. The story begins with a pre-credit scene depicting the birth of Alucarda in what appears to be a grotto. The mother (Tina Romero, who also plays the young Alucarda) dies after entrusting the baby to a gnomic type character. The scene is reminiscent of the “birth in a manger” story of Christ. 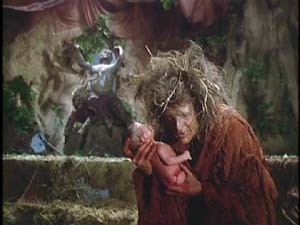 The story continues with the arrival of a young girl, Justine (played by Susana Kamini) at a convent. From the start we are made aware that this is no run-of-the-mill convent; the nuns are swathed in white bandage-like habits rather than the regular black and white garb of other nun films and they also seem to be covered with bloodstains. As Justine is shown her room, Alucarda seems to appear out from the wall behind her, emphasizing (as does her name) the spectral quality of her character. 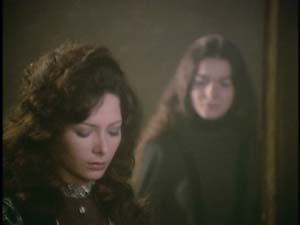 Justine and Alucarda become fast friends and Justine is shown all of Alucarda’s “secrets”. At some point her influence over Justine turns towards “evil”. During a mass Alucarda starts screaming out names of evil angels and demons. The nuns start screaming in fear and flee the sanctuary. The priest then decides to exorcise both Justine and Alucarda.

In a scene reminiscent of the inquisition, a nun repeatedly pierces Justine’s prone naked body to let the evil bleed out from within her, but the strain proves too much and she dies. Justine’s body is to be prepared for burial when it inexplicably disappears, and the nuns cannot explain what happened to the sister who was keeping watch over her. Justine is, of course possessed by the devil and all efforts are engaged to try to find her body to destroy the evil.

The most pious of the nuns finds Justine soaking in a blood-filled coffin and pleads with God to liberate her soul. In a gorey scene that would not be out of place in a Lucio Fulci zombie film, she rises out of the coffin to attack and bite the nun on her neck, causing her to die from the loss of blood pumping from the wound. These events eventually point towards Alucarda as the main evil influence, and the film concludes with a delirious fifteen minute exorcism scene. The final frame is of a burning cross. 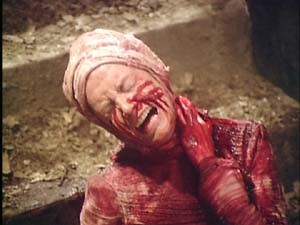 Alucarda is loaded with powerful and politically charged imagery; the last scene seems to imply that with the destruction of religion (the burning cross) and the subsequent death of Alucarda, evil cannot gain a foothold in our world. Religion and evil must walk hand in hand, destroy religion and there is no evil. The last sequence shows the destruction of both good and evil as defined by religious observation.

The source print suffers from some bad reel change damage, and copious amounts of speckling. However, the DVD image is remarkably free of digital artefacting, but has some edge enhancements that are noticeable. The colors are rich and the contrasts are quite good. Probably due to its short length, there is a minimum of compression, which ensures a good digital image that is stable throughout.

The soundtrack is available in English stereo (which the actors mouth correctly, but is clearly dubbed by other actors) and dubbed Spanish mono but has no English subtitles.

Special features include the trailer and still gallery; a British documentary on the director and an interesting interview with fellow Mexican director and horror fan Guillermo Del Toro, who has horror films Kronos and The Devil’s Backbone to his credit. Much is made of Moctezuma’s working relationship with Alejandro Jodorowsky and the influence it had on his work. As an added piece of trivia, the sound engineer on Alucarda is the same as Friedkin’s The Exorcist.

For fans of obscure horror, this DVD is definitely worth the purchase, although finding it here in Quebec may prove to be a little difficult, so you may have to order it through a reputable web source; enjoy the screams.