Hundreds of directors, producers, distributors, commissioners and others from all corners of the documentary industry from all corners of the world descended on Fremantle Western Australia for this year’s Australian International Documentary Conference (26-28 February). Sándor Lau, a Chinese/Hungarian-American based in New Zealand dives into the belly of the beast in search of its soul.

Films for the Finnish housewife—Documart training

From sixty applicants, fifteen lucky finalists have been chosen to pitch their ideas to an audience of twenty international commissioning editors, in a bid to convince them to open their hearts, minds and checkbooks. The day before the conference officially starts, the lucky contestants get a day of training on how to talk to the money at Documart. Barbara Truyen of Films Transit International, a worldwide distributor based in the Netherlands, leads the session and shares the following nuggets of wisdom:

If anyone can do something, documentary makers can

The conference begins with an Aboriginal opening prayer, then an amazing speech by Julian Burnside, QC. Burnside lays down exactly how the Australian government, with its treatment of asylum seekers, is guilty of serious crimes against Australian law and humanity. When he recently brought this to the attention of the Australian media, they did not find it newsworthy, but he finishes his speech by saying, ‘if anyone can do something about this, documentary makers can’. 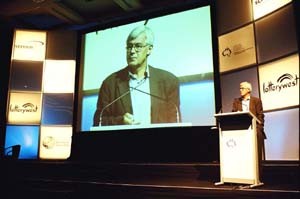 You can’t blame the broadcasters

In a session on Free Speech and the Free Market, director Tom Zubrycki (Molly & Mobarak) laments how docudrama, reality TV and infotainment siphon funding away from documentary, and force it to imitate them to compete with their ratings. The bad boy of Australian documentary, Dennis O’Rourke (Cunnamulla) tells how all his early films were censored from screening in Australia and only played in Britain. He’s quite fond of using the word ‘schlock’ and accuses many people present of being charlatans because what they make cannot be called documentary.

I think this is an excellent time to point out that under Australian law, he, like Julian Burnside, has quite a case. The Australian Film Commission defines documentary as ‘a program that is a creative treatment of actuality other than a news, current affairs, sports coverage, magazine, infotainment or light entertainment program, and corporate and/or training programs.’ (Of course the phrase ‘creative treatment of actuality’ is John Grierson’s own original definition for the documentary, ed.) Defining documentary for filmmakers is like defining sexual relations for Clinton or weapons of mass destruction for Bush, and the Australian definition is better at saying what documentary is not than what it is. But at least they have a definition. One by which many New Zealand ‘documentaries’ could also reasonably be called charlatan (for more on this, check out something on last year’s New Zealand On Air documentary symposium.)

Ned Lander is the senior commissioning editor for documentary at SBS (Australia’s multicultural broadcaster). When the other panelists put some hard questions to him about the backlash against intelligent documentary in the post-9/11, post-reality TV world, he says, ‘You can’t blame the broadcasters … why didn’t filmmakers speak up?’ You can’t blame the colonists, why didn’t the Aborigines speak up?

Krishan Arora of the BBC shows a clip for a dinosaur documentary that looks like the action scenes from Jurassic Park—his example of a great opening. According to Arora, the BBC doesn’t deal in documentary anymore—now it’s called ‘factual programming’, a category I assume has a somewhat less rigorous definition than documentary under the AFC. To me it sounds like the kind of corporate language management that brought us phrases like ‘redundancy’, ‘embedded journalist’, and ‘collateral damage’.

In the world of 500 channels and by-the-minute ratings, five-minute openings on the BBC are now extinct. And what Krishan Arora wants to see in the first minute is sex, branding and excitement—because, he claims, that’s what viewers expect—presenters and voiceovers, action and ‘action.’ I ask him, ‘Don’t you think they expect it because during a lifetime of viewing, that’s exactly what broadcasters have trained them to expect?’ and he quickly changes channels.

The Dili Massacre and the depleted uranium

British journalist, cameraman and filmmaker Max Stahl filmed the 1991 Dili massacre, which has featured in Punitive Damage and virtually every other film about East Timor. He kept rolling even when the Indonesian military looked at him down their sights and ordered him to stop shooting or they would start.

I don’t know if I could prove it in court, but I guess this man’s concerns go somewhat beyond target audience, branding, and programming slots. But of course when he decided to stay in East Timor and continue filming after his colleagues went home, the BBC fired him.

Sophie McNeill, an 18-year-old video journalist who made her first documentary alone in East Timor at 15, shatters my illusion that I am the only one here under 30. Now she works for SBS and recently convinced US sailors docked in Fremantle Harbour to show her the depleted uranium storage on their ship while the US ambassador in Canberra denied there was any.

SBS programmes like Dateline and Insight have made the work of solo video journalists an institution. The flexibility of small digital cameras finally allows a closer approximation of an early and classic sense of documentary—the unobtrusive documentation of events as they happen. This style sharply contrasts most contemporary fast-turnaround journalism—perhaps better defined as a creative staging of actuality. And of course we can blame NZ filmmakers for not speaking up about instituting this kind of investigative journalism here, if you can find a single one of them who makes funding decisions.

Day 2—Christians to the Lions

Today is Documart, the production funding gameshow. Our fifteen lucky producers each get seven minutes to pitch for hundreds of thousands of dollars of prize (production) money and a chance to broadcast on exotic foreign televisions that reach even the Finnish housewife. Richard Sowada, director of the Perth Revelation International Film Festival, describes the contestants (producers) as the Christians and the judges (commissioners) as the lions.

Annie Goldson and Leanne Pooley are the only New Zealanders among the lucky 15. And while their projects are very different, the commissioners notice what they have in common is a very attractive NZ pricetag. With an hour of American Discovery Channel clocking in at US$1million, and the average Australian one-hour slot funded at A$200,000, New Zealand budgets (which are typically around NZ$140,000) seem like early Mäori land ‘sales.’ 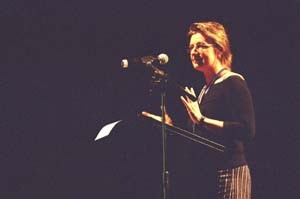 I originally come from the US, where friends and relatives go on about how New Zealand is such a great place to be in filmmaking right now with the Lord of the Rings hype. Barring a Making of LOTR, I don’t see the hype having any effect on the miniscule number of NZ docos ever to screen overseas. So it comes as no surprise to me that the only two Kiwis in today’s game show have extensive experience making films in Britain and the US.

New Zealand has not colonized a sufficient number of foreign countries to make all NZ stories ‘universal’. But the common perception of NZ documentaries as inherently provincial is easily refuted by some very notable international successes, as well as the fact that here at Documart, an Australian company is pitching a doco about the life of photographer George Silk, A NEW ZEALANDER!

While per-film budgets have something to do with the state we find NZ documentary in today, larger structures tell a larger story. Australia has two (TWO!) public broadcasters, SBS and ABC while in New Zealand we have TVNZ, effectively a private broadcaster complete with reality shows and infomercials, but tax-funded and state-owned. One quantifiable difference: a broadcast hour on SBS contains fifty-two (fifty-two!) minutes of programming and on ABC, it’s fifty-five (55!), which is to say twenty-five percent longer than the forty-four-minute Kiwi hour.

Korean-Australian director Melissa Lee pitches Yukai!, a project about Japanese people kidnapped by the North Korean government, which ABC and SBS are both keen to get their hands on. While Australian broadcasters keep certain slots Australian-content only, they are also happy to fund docos that have nothing to do with Australia. Except that they were made by Australians and therefore show the world from their own point of view. Just like New Zealand could if we had the funding structures. Until we do, we’ll continue to get the world from the point of view of Rupert Murdoch, Bill Gates and Ted Turner.

Day 3—The Market Has Needs: Give up, buy in, sell out

Glenys Rowe is the general manager of SBS Independent, and her advice to up and coming filmmakers is basically this: give up, buy in, sell out. She laments her younger maverick filmmaker days before she came to the corporate side of things, and sums up her character arc like this, ‘I learned there was such thing as a market, and the market had needs’. 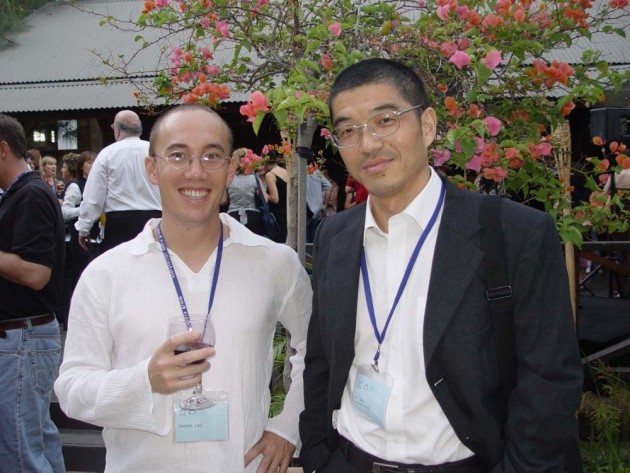 I think back to the opening of the conference, when Julian Burnside talked about how Australia continues to commit crimes against humanity and documentary makers are the ones to tell the world about it. And I’m still kicking myself for not asking Glenys Rowe what part of the market needs the boys rotting in Woomera.

It’s a Saturday night and as I walk to catch my train, Aboriginal teenagers are gathered at Fremantle station to pass around a glass bottle in a paper bag. I remember the great Aboriginal opening prayer we had—just before spending the rest of the conference without one single mention of Aboriginal issues, except to note that it is 2004 and there is still no Aboriginal member of the AIDC board and there should be one next year.

At the panel on Free Speech and the Free Market, they never talked about the A$600 conference registration fee as a form of censorship, nor about the fact you could count the Aboriginal filmmakers attending on one hand. I walk past the teenagers at the train station wondering who will tell their stories, and consider asking them for a sip out of the glass bottle in the paper bag—maybe it will help me understand the marketplace.

Sándor Lau is New Zealand’s only Chinese/Hungarian American and believes Australian Prime Minister John Howard should be imprisoned in Woomera for his crimes against humanity.