A group of emotionally troubled teens imprisoned in a mental asylum and suffering sleep disorders (with some impressive nightmares orchestrated by that familiar burned-faced, razor fingers glove wearing figure in a red-and-green sweater and hat) learn from the new intern counsellor Nancy Thompson (a returning Heather Langenkamp), who practices a form of radical dream therapy – to the hostile bemusement of the Nurse Ratched-style Head Bitch in charge, played by Priscilla Pointer, and the befuddlement of nice guy Doc Gordon, played by ultimate 80’s milquetoast nice guy actor Craig Wasson — they are the sole surviving kids of those Elm Street parents who burned alive that child molester we-all-know-and-love and that their only chance of continuing to stick around is by bonding together, learning from Nancy how to control their dreams and fighting Freddy Krueger himself right smack dab in in the middle of his mind-melding anything-goes nightmare-scape turf. And the fact that one of them, Kristen Parker (a young and adorable right out of the gate Patricia Arquette, in her first role), the new Nancy Thompson on the block (equipped with her very own promiscuous and alcoholic single mom just like Nancy, continuing the theme of troubled parents and guilty secrets destroying homes and the children within) has the helpful – and awfully convenient (like a lot of the film’s narrative) – power to draw people into her dreams helps kick these dream warriors into action. 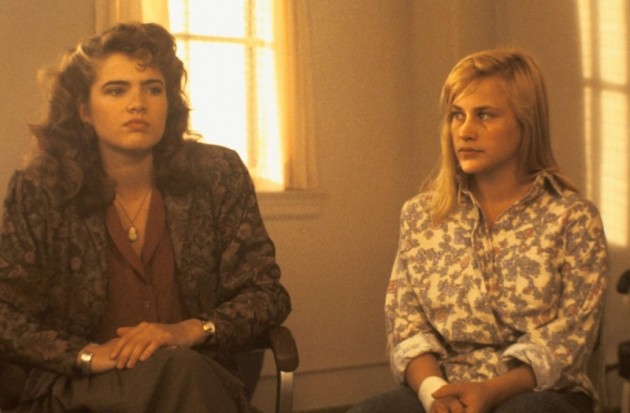 A young Patricia Arquette (on the right)

After the frightening and powerfully dark tone set with the first two “Nightmares”, it was a bit disappointing to feel, for the first time with this go around, the evidence of some commercial-minded tampering. While the imagery is certainly impressive, with a big chunk of the film’s budget clearly focused there (that giant Freddy snake that half-gobbles up Kristen is worthy of poster space on any self-respecting horror fan’s wall), it’s the over-lit quality of it all (as compared to the much more effective shadowy lighting of the first two), as well as the broader treatment of the now ever-punning Freddy (having his head grow out of a television with antennas popping from his skull as he uses suddenly hydraulic arms to ram one of his young victims head-first into the tube, for instance), which doesn’t speak of anything beyond trying to think up of wild, not particularly scary gags (unlike the first two films which were brimming with the underlying sense of genuine unease from which nightmares are made) waters down a lot of the delicious sense of fear carefully cultivated up to this point. It’s still early in the series, so the power of the Krueger creation is nowhere near gone… but if I remember correctly… this remains the direction the series keeps going in, unfortunately, eventually rendering Freddy as more and more a clown-figure. 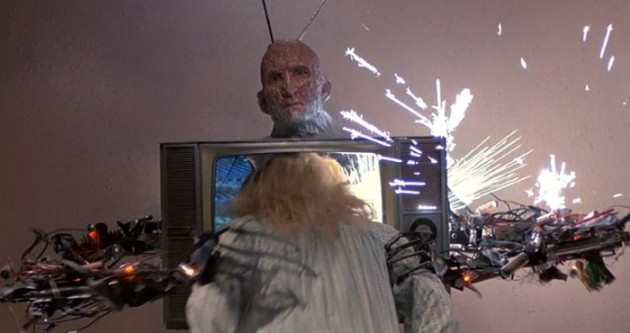 The very fact that the narrative moved from exploring the intimate growing terrors of, successively, Nancy then Jesse, as they come to grips with this demonic force of nightmarish vengeance looking to destroy them and those around them, to this much more fantasy-oriented “Goonies”-style tale of a group of young teens bonding together, with each using his or her own ‘special power’ has potential as family entertainment perhaps, but renders this barely a horror film (other than the gruesome bits that thankfully remain). There are way too many shamelessly goofy moments, with the scene of the weakling boy who lives out a fantasy by turning himself into a gosh-darn real wizard (though a seriously second-rate one, shooting awkward optical green rays from his fingers) being perhaps the most egregious. Not far behind is the sudden truly lunk-headed resorting to Christian iconography as an effective means of warding off the ‘evil’ Freddy (as well as killing him with holy water in a final grave), an addition I can only hope was cast completely out during the creative discussions regarding the fourth “Nightmare” instalment that would hit the theaters just a year later (with New Line seriously cashing in on the Freddy craze at this point)… though I guess we’ll see. And nothing to guarantee your horror film doesn’t hold up over time then the bringing aboard one of those silly, somehow once popular 80’s big hair heavy metal bands, in this case, to contribute a ‘Dream Warriors’ song over the final credits (to help push the soundtrack album). Eegads. What an atrocious practice that was in the 80’s. 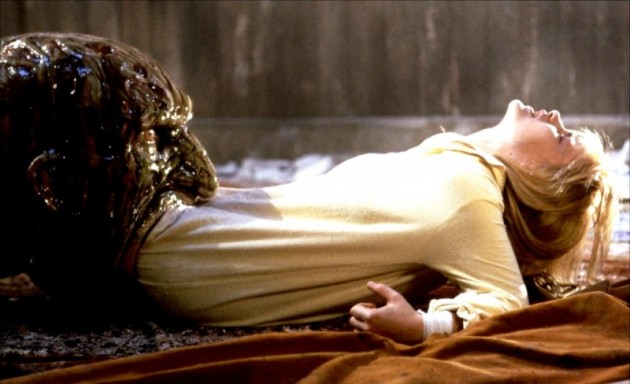 And there’s the narrative questions. Why, for instance is Nancy so much older than the other survivors (other than to just make her the leader of the pack)? Is Freddy killing these kids in reverse age chronology for some reason? And what even was the point of Freddy’s quest to use Jesse to ‘burst out into the real world’ of the previous sequel (other than, of course, to thankfully have provided all of that amusingly eye-opening fodder for the official gay Nightmare entry), especially as his goal now just seems to be back to the original of straight up razor-sharp dream vengeance, baby.

Saying that, while they clearly kinda… well… ignore a bit the second entry, at least they don’t outright canonically reject it, as, for instance, Halloween H20 (another one of those iconic horror franchises I’m currently wading my way through – though I’m thinking I should also add in Friday the 13th to the current viewing list, especially as that series’ Michael and Freddy eventually cinematically duke it out) did with that series’ preceding “Parts IV, V and VI” (otherwise known successively as “The Return”, “The Curse” and “The Revenge of Michael Myers”, with, as someone pointed out to me recently, the producers seemingly driven by a possibly subconscious desire to crib the original “The Pink Panther” sequel titles) all because they had no clue how to incorporate the untenably convoluted directions those films took the mythos… and now, even more confusingly, the new highly anticipated Halloween entry directed by art-house favorite David Gordon Green reportedly entirely dismisses the existence of all of the “Halloween” films except the first (I’m guessing in order to steer clear from the ‘Shape and Laurie Strode as siblings’ idea introduced in the first – and particularly excellent — sequel). 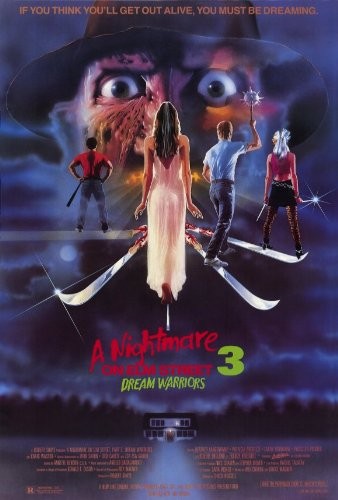 There is also little convenient peculiarity that every one of the surviving kiddos ended up in the exact same mental ward. And how did no one in that junkyard ever notice what must have been an overpowering smell of Freddy’s decomposing body in that trunk over all those years? Who in their right mind would have hid it there in the first place?

While, of course, it’s not exactly an anomaly for our favourite horror films to have a few (okay, sometimes a lot of) narrative ‘gaps’, shall we say, these can be, and often are, made up for by a visceral momentum garnered from an eye-popping sense of visual flair, thematic resonance (intended or not) and/or just a gleeful wallowing in the gory gristle and bone us horror fans always appreciate (and which the first two “Nightmares” provided a nice mixture of all three). Unfortunately, this “Nightmare” isn’t gripping enough an experience, or edgy enough, or even particularly visceral (as much as it tries with its fun guignol set-pieces) to reward it this stance.

While the young actors are mostly forgettable, playing their roles less for gritty believability than for a non-threatening young adult sensibility (such as that softie black kid straight out of LA casting unconvincingly playing the urban street thug), Arquette, at least, proves intriguing. Even if she’s nowhere near yet having polished that adorable persona to come, she still manages a grounded quality and enough resonance to her performance to hold interest (something no one else in the film other than John Saxon, who also returns as Nancy’s father, whose retirement from his sheriff’s post and inability to deal with the horrible thing they did to Krueger – and the repercussions it had — has left him spiralling into entirely dysfunctional alcoholism, is able to manage). While not yet ready to supplant her much more openly sexually provocative sister Roseanne, who still was the focus of many a young teen’s cinematic infatuation at that point (her role in the TV film — The Executioner’s Song – my oh my), the younger Arquette was already showing signs it was coming.

Even my daughter, who actually suggested to me at the end of “Nightmare 2” not only that the series should move in a new direction, but explicitly that they should get a group together that has the power to enter Freddy’s nightmare-land and fight him, was slightly underwhelmed by the results. Russell does a competent, if unexceptional, job showing us the impressive effects work, but doesn’t capture anywhere near the sense of inspiration captured in the first two films (saying that, I’m still intrigued to re-catch up with Russell’s other 80’s special effects extravaganza, namely The Blob remake, which I saw only once when it came out and remember little about, other than a strong memory of being gob-smacked by the gore effects).

It’s the least of the three so far (though my daughter leaned slightly towards putting it higher than the second one, buying in a little more to the effects work and production design than me – but I’m convinced that’s just because she isn’t getting the magnificent gay subtext – or, more accurately, text – that makes that first sequel so special). Worse, if I remember correctly, with its more broad approach, and further growing interest in spectacle over the creation of terror, it’s the beginning of a downward trend in the series. We shall see.