“I’m scared, Grady. Something is trying to get inside my body!”
“Yeah, it’s female and it’s waiting for you in the cabana. And you want to sleep with me.”

Teen Jesse (Mark Patton), an angst-ridden drip of a kid (much more on that later), his kid sister and stuffy folks move into that Thompson house on Elm Street unaware that the good deal on the digs is all about the horrific events that went on there five years earlier (other than dad, played by long-time, once tough guy actor Clu Gulager — acting in that over-stated manner familiar to many a horror film in the 80’s — who isn’t gonna pass on a deal that no good suburban opportunist in his right mind would, keeping it to himself how one previous occupant had gone mad – namely Nancy from the first “Nightmare” – and the other had been murdered – Nancy’s mom). Along with some random, mostly ineffective throw-away haunting moments (including the suddenly viciously family pet lovebirds suddenly attacking before unaccountably exploding into smithereens and the toaster that shoots flames when it isn’t plugged in – all with dad’s allegorical, rather than remotely realistic, reaction of blaming Jesse, distrustful as he is of his son’s taciturn and anxious teen behaviour, as having set it all up), much more terrifyingly (and convincingly), Jesse finds not only his nightmares invaded by that now familiar burned faced figure in red and green stripes named Freddy, but starts to become convinced that the demonic figure is somehow forcing him to don that razor-fingered glove and… commit murder. 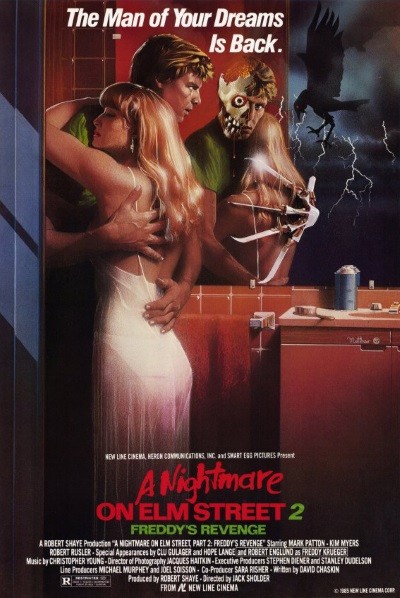 Drawn somnambulistically into a shadowy S&M bar, the barely-dressed Jesse finds his domineering gym teacher (“everyone knows he’s into the leather”), takes him back to the high school, where they both get naked and – with Freddy guiding (it’s not Jesse doing it, of course – it’s gotta be someone else inside him!) – he ties the dominant and horny teach up and literally whips his ass with a wet towel as he kills him. Jesse and Grady (Robert Russler), overcoming their initial tensions before becoming buds (eventually leading to them exchanging that particularly revealing dialogue above), have an early fight in the schoolyard that looks more like an excuse for a groin-grinding session than much of a tussle (my confused thirteen year old daughter asked ‘What exactly are they _doing_’?). Jesse is just starting to get down and dirty with that doe eyed cutie high school girl Lisa (Kim Meyers) who keeps throwing herself eagerly at him… until, what do you know, that wet and gooey force of dark conflicted desire hiding deep within the boy suddenly starts pushing to get out, breaking up any chance of an intimate moment yet again. Jesse dons shades and begins slinking about his bedroom to a disco number in a scene clearly mirrored after (okay, straight up ripping off) one of the most talked about cinematic Hollywood moments fresh in everyone’s mind from just a few years prior… and, yet, somehow, the lithely dipping Jesse doesn’t quite conjure up the horny teen excitement of a very young Tom Cruise, alone at home, exuberantly pretending to be Bob Seger belting out “Old Time Rock n Roll” as he eagerly awaits the arrival of his smoking hot female escort played by Rebecca De Mornay in Risky Business… no, somehow the disco-weaving boy of “Nightmare 2” evokes something else entirely… which leads to the question…

How is it even remotely possible, with scenes like these (as well as overt dialogue like the lines above) that director Sholder — and apparently just about everyone else involved – didn’t notice how overtly flamingly hot gay this second “Nightmare” entry was turning out to be (it suddenly reminded me, though with the “Nightmare” example being much more blatant in its fixations, of the underlying themes in another also lesser yet worthwhile second entry in a famous horror franchise – namely, Damien: Omen 2, in which we follow the teen antichrist to an all boys military school where the domineering head men in their sleek military outfits, led by genre legend Lance Henriksen, teach the burgeoning boy the meaning of being an ‘other’)? 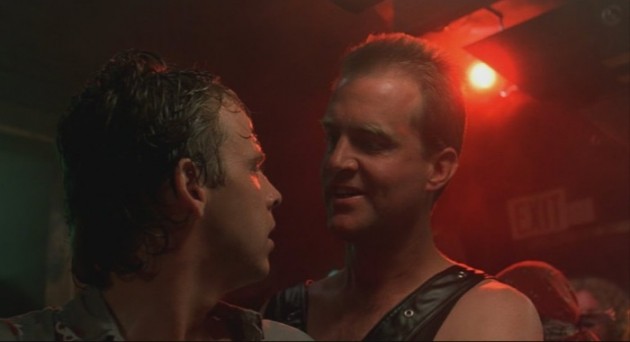 I mean, don’t get me wrong, that Freddy, in this one, is so overtly a (screaming) metaphor for the bubbling up of (oft screaming as well) Jesse’s destructive repression at his closeted homosexuality is certainly a worthwhile avenue of exploration for the character (in fact, to be completely frank, when you take a wide eyed and clear look at the genre – with its obsession with otherness, death-after-sex, wet and gooey body transformations and all those young sexy ladies getting slaughtered – why, I’m sorry to inform all you horror nerds – but it actually feels like a natural place to look) and Patten (the one person involved who recognized what it was all about – not surprising as he is, in fact, gay) manages a pretty intensely anguish-laden and honest performance (embarrassing dance number aside) in the midst of some unexceptional efforts by his fellow high school players (Russler, in particular, has a moment, in which his character talks with his mouth full, trying to achieve some effect that I’m not sure would be clear to anyone, that had my daughter incredulously asking “Wow, is it possible to over-act any more than he just did?”).

The imagery and mise en scene within Jesse’s nightmares don’t have the same phantasmagorical flourish of Wes Craven’s in the first entry, but they’re still scary enough (and weighted intriguingly with the aforementioned sexual tensions). The opening nightmare set-piece of the film, however, in which Sholder I presume was looking to create a spectacular moment with which to carry us into this latest film — with an obvious miniature school bus dangling impossibly over a canyon – ends up coming across as unexceptional, missing something that Craven implicitly understood (and Sholder hits better upon as the film progresses) – that intimacy between Freddy and his victim(s) is needed to be really terrifying.

I’m not so sure about the concept of Freddy jumping into the ‘real’ world (an idea I think they moved entirely away from for the rest of the series, but I’ll see as I revisit them) as he ends up suddenly coming across a bit small and ineffectual running around that pool attacking all those kids (you have to wonder why they just didn’t all turn around and jump him at once). Nah, his real power lies in terrorizing the darkest areas of our minds and subconscious, with all that that implies. 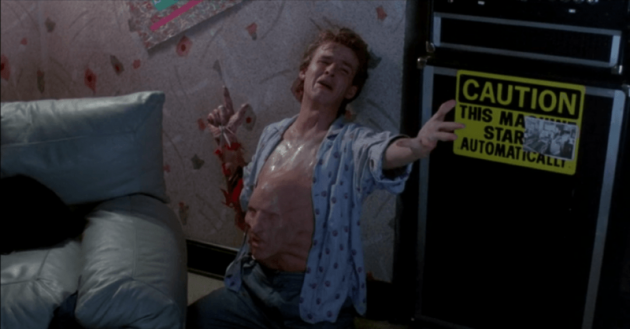 I can’t say I know exactly how, but Freddy’s makeup is definitely a bit changed from the first, yet it remains equally — if not sometimes more (with the considerable aid of some intensely done extreme close ups on Krueger’s wet and horribly grotty skin and bloodshot eyes) – as darkly effective as in the original. The scenes of Jesse screaming as Freddy physically begins to push his way through his skin are intense and, the culminating moment, when Freddy literally bursts forward from the boy’s chest, provides a really nice illustration of what a horror film can offer, both from the standpoint of wild practical effects, to the thematic underpinnings that give it resonance.

Nightmare 2 might be a lesser entry to the first, but I found it much better than it’s often gets credit for. The old gay war horse of the lot has aged well, I’d say.