It’s still Halloween night and the Shape Michael Myers, after being stabbed, poked in the eye and shot five times, including once in the face (‘merely a flesh wound!’), with admirable single-mindedness continues his mission of ridding the world of the newly hospital-interred Laurie Strode (Jamie Lee Curtis), with the traumatic events of the night recounted in the first film instead of turning her hair white, somehow having resulted in it transforming into an entirely new ‘do. An even more unhinged Dr. Loomis is still after him, this time with the help of the entire Haddonfield police force.

With that original already unforgettable score made even better (dare I say, far better – the new addition of that whole breathy, deliciously anticipatory opening movement before the familiar driving repetitive score kicks in is just… perfect, and the whole score is just more powerfully filled in, which might perhaps have to do with Carpenter bringing co-composer Alan Howarth along to collaborate with), the even more complex and impressive roving POV camera work (especially at the beginning, as our favorite mass killer, with that familiar effective Darth Vader methodical breathing, stalks the streets and homes of Haddonfield causing a few deaths along the way), the evocative lighting from Carpenter’s long time brilliant collaborator Dean Cundey (surpassing even the creative work in Halloween, certainly in terms of scale which likely has a lot to do with the larger budget), some really effective kills (including more than one nasty needle in the eye action as well as the cleverly ironic moment of Laurie’s potential new love interest slipping on the red plasma of a bled-out victim and cracking his head open), nicely naughty gratuitous booby shots and an explosively fiery conclusion that could never have been achieved in the original (not that that film’s brilliantly conceived ending needed any changing), what can I say? Yes, John Carpenter two years before brilliantly laid out the unforgettable simple good vs. unstoppable evil iconography that’s become deeply embedded into our genre psyches, but, man, is Halloween II a rollicking follow-up.

Relying less on suspense and more on sensational set pieces and a constant driving forward momentum, Halloween II also manages to get rid of the slower and clunkier moments of the original, though I’ll never quite figure out the logistics of how that kid wearing the Halloween Shatner mask mistaken for Myers by Loomis (an understandable mistake, I mean, what kid would think of putting together a costume of construction style overalls and a Captain Kirk mask?) is chased into the street and hit by the police car… it all just plays out quite awkwardly (even if the big explosion and burning body are effectively played). 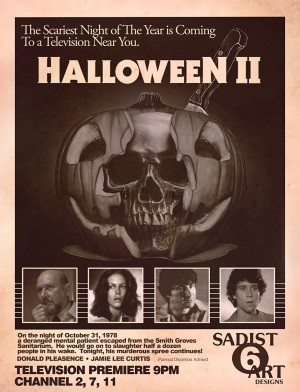 The original Halloween may have set it all up, but its the second one that’s the go-to entry for me, in terms of a well-made, firing-on-all-cylinders slasher (though, to be fair, I don’t think many – or any — had the budget of this one). Starting as it does immediately after the events of Carpenter’s original provided a nice way to keep the momentum going without the need for much build-up or unraveling of an mystery (okay, there’s a little oddity with the aforementioned suddenly revised hairdo on Laurie and the slight crime of unnecessarily revising the original ending by having the good Dr. Loomis now come down the stairs to find the presumed Myers has somehow gotten up and walked away, rather than seeing it from the balcony above… but that’s all easily made up for with the perfect laying in of the aforementioned opening musical movement tracks over Laurie and the Shape fighting as Loomis arrives to shoot him all up). And along with the added adrenaline, Halloween II even cleverly adds to the mythos, with Laurie and Michael revealed as sister and brother, nicely tying it all together and giving some credible – well, as credible as these things get, anyway — motivation to the seemingly mindless killing machine that is the Shape, even if the makers are regretfully planning to drop this nice siblings tidbit for the upcoming slightly dreaded reboot (I only say slightly because of the glimmer of a silver lining that Rob Zombie will no longer be involved).

The final scenes of “II”, starting in the dark hospital surgical room (by the way, I know it’s nighttime, but why are all the lights turned out in this hospital? It’s as realistic as the shadowy laboratories and police precincts in those endless “CSI” shows… I mean, doesn’t anyone need to see anything?), with the evocative image of blood streaming out of both open eye sockets of the Shape’s Kirk mask, as he whips that scalpel blindly about looking to slice open Laurie, with neck vein-bulging Loomis managing to eventually fire it all up with that lighter of his we are conspicuously shown throughout (how he survived not having blown himself into smithereens with merely some facial scarring and a limp for his return in the fourth entry is something to ponder, that’s for sure) and then on to the final long lingering close up on the now steadier Laurie (certainly much more together than the tortured innocent at the end of the original) in the back of the ambulance, having survived and seemingly been transformed from the night of terror, yet with an oddly tranquil, somewhat ambiguous look in her eyes, before cutting to black with the sublimely ironic reprise of “Mister Sandman”… well, it’s all wonderful fodder for the shared genre memory banks.

Rick Rosenthal may be listed as the director and, other than the early celebrated Sean Penn vehicle Bad Boys (which I haven’t recently seen but I’ve heard has dated badly, revealing itself to be not much more than a weaker, watered down version of Alan Clarke’s influential and powerfully raw British prison film Scum) he hasn’t defined himself with anything noteworthy beyond this film (and I’m currently including you in that, Halloween: Resurrection, though who knows, maybe I’ll have a sudden wild change of opinion when I get to it and no longer think of it as a glaring example of those awful, slick corporate products that our favorite horror franchises started to become in the late 90’s into the aughts). With the obviously firm hand of Carpenter (and his filmic comrade in arms at the time, Debra Hill) working behind the scenes in this one, I suspect you could say with some accuracy it’s the best Carpenter film not officially directed by Carpenter himself (with Halloween III: Season of the Witch not for behind).