The 68th edition was a special year for the Mannheim-Heidelberg International Film Festival knowing things would never be the same again. 28 years ago, Michael Kötz, a young politically charged intellectual took over smoothly from Fee Vaillant who continued her support of the festival dropping in most evenings for a glass of beer and a film or two despite her advanced years. The departure of Kötz will be a different story. He is taking his whole team with him, from his wife Daniela Kötz the program manager to the technicians and accountants, including myself, program advisor for over two decades.

One of the most prestigious film festivals of Europe, with the reputation of launching the careers of Fassbinder and Wenders among others, the festival has been losing its audience in recent years. There is a film festival somewhere everyday and furthermore, the digital revolution has introduced other mediums to watch movies. Bringing celebrities costs money and with the low attendance figures, the municipalities are not willing to hand out large sums. Even the international main jury was stopped this year asking the public to award the best films. The Fipresci and the Ecumenical jury remained along with the jury of the cinema owners.

Under the Turquoise Sky

Several films competing for the Grand Newcomer Award and the Talent Award were with merit but some outshone the others. The opening film, Nomin Tengeriin Hyazgaart/Under the Turquoise Sky, a Japan, Mongolia, France, USA co-production by Kentaro who has had experience acting in several Hollywood movies attracted large audiences with its exotic landscapes of Mongolia where 70-year old cranes were used in remote rural areas. The humour, often at the expense of the Mongolians in my opinion, was easily accepted and not much questioned. The story of a young playboy of fortune, sent to Mongolian wilderness to reach maturity with an unlikely guide, a horse thief to say the least, was rather cliché, but the main actor, Yūya Yagira, with a reputation as the youngest to win the Best Actor prize at the Cannes Film Festival with his role in Kore-Eda Hirokazu’s Dare mo shiranai / Nobody Knows (2004) impressed the audiences with his measured and subtle acting on screen and his modest and generous presence throughout the festival.

My favourite Japanese film, however, was Buru awa ni buttobasu / Blue Hour by Hakoto Yuko, a woman film-maker. A truly feminist film, rather than repeating the established ‘language of the fathers’, Blue Hour excels in its search for a new language to highlight the predicaments of women in different social scales and milieus of the patriarchal Japanese society. A young urban dweller with rural roots feels uneasy inside her skin. At the critical age of 30, she reflects on her seemingly smooth life as an executive in the masculine dominated television commercials sector and her relationships with her cool but immature husband and the aloof married lover, her senior in the industry. She is cynical about families and raising children but feels the pressures of society that expects individuals to perform according to the time-honoured universal rules. By thirty, one must sow one’s wild oats and settle into marriage and parenthood. Always soft spoken and with a downward gaze, she finds her mind traveling to the fields of her remote village where she used to roam as a child in the early hours of the day that were imbued in hues of blue. Her Tokyo days usually end with much booze and self-hatred. When her beautiful girlfriend from the city, who carries the sunshine with her wherever she goes, proposes an actual trip down the memory lane to visit her ailing grandmother, the protagonist cannot refuse. But things are more complicated than they seem and reconciliations far from reach. Bickering parents, farmers who keep cows for milk but keep them locked in the barn; a father who began to collect samurai memorabilia in retirement, a brother who looks like he just dropped from outer space and middle-aged village men who frequent a sleazy bar displaying another kind of sexism to match what goes on in Tokyo are so distant from the peaceful blue hours of her childhood. The most touching moment is the visit to her ailing grandmother. The sequences when she gently clips her grandmother’s nails stay in memory long after the film ends. The following episode, a singing session with a group of elderly is so much like a day in a kindergarten that it completes the cycle of life helping the protagonist to find her place in the cycle. On the way back to Tokyo, she regains her voice and cries loudly and abundantly. 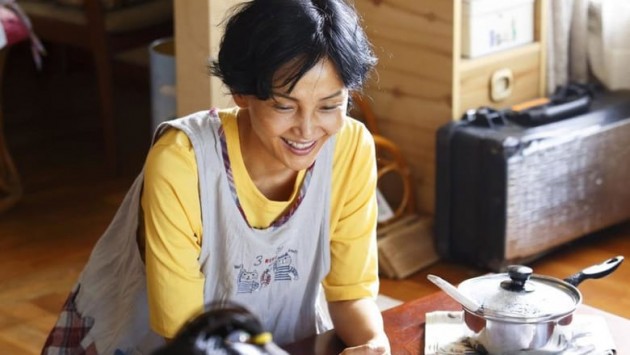 Another Asian film in the same section, Ohong Village (Lim Lugyin, Taiwan/ Czech Republic) focused on the hard-working people of oyster farms who are hardly recognized as victims of typhoons or hurricanes. Even the protagonist, an educated man who went to seek his fortune in Taipei derides his family although having faced failure in the big city, he has no alternative but to return and take over the family trade. Just like Blue Hour, the film juxtaposes two old friends of different character that somewhat serve as the other’s alter ego. Educated Sheng left but uneducated Kun stayed. Parallel to personal and familial conflicts runs the preparations for a religious festival intertwining the individual issues with societal. The moments when such issues confront each other are the repeated visits of the father to a medium in hopes of finding guidance to his dilemmas. Ohong Village was the graduation film of the director from FAMU, the famous film school in the Czech Republic. The overindulgence in local color displays somewhat of a tourist’s gaze to rural Taiwanese society, which could come from the European element in the production. All women are figures in the background but three men carry the narrative with strong performances from actors with different backgrounds. The most accomplished is King Jie Wen, who comes from cinema and plays the father. His acting is subdued and measured. Chen Hsin Tai, a celebrated television figure who plays the friend Kun, the cute misfit/loser with an independent spirit is relaxed with his role. Lin Yu Hsu who comes from theatre and plays the main character Sheng is somewhat uneasy in front of the camera, often retorting to hyperbole.

Several films from Canada were also competing in the same section. À tous ceux qui ne me lisent pas / For Those Who Don’t Read Me (Yan Giroux) inspired by the Quebec poet Yves Boisvert (1950-2012) and played by Martin Dubreuil captured the interest of the viewer through inserted episodes of poetry readings in bohemian atmospheres delivered in gentle colors, but the cliché narrative trying to merge the free-spirited poet’s turbulent story, the couple’s fragile story and the adolescent boy’s coming of age story, with a certain dog chained to his home motif inserted here and there, did not work very well. The relationship between the poet and the adolescent son (Henri Richer-Picard) of his girlfriend (Céline Bonnier) was predictable except for a few moments that kept the viewer on edge. 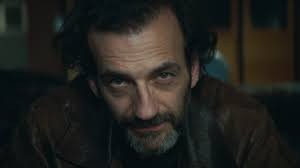 Dérive / The Far Shore (David Uloth) another film from Quebec was an ordinary family melodrama, whereas Mélanie Charbonneau’s Fabuleuses / Fabulous touched upon a serious social malaise, the influence of the media craze in our lives, especially for the young in search of a career. However, ‘touched upon’ is the appropriate phrase to define this film that does floats on the surface. A film directed by a woman with three women lead characters (Noemie O’Farrell, Juliette Gosselin, Mounia Zahram) misses the opportunity to delve into issues that seriously affect women. The first part when comedy overrules is passable, but when it tries to get serious in the second part without any depth, it fails. The Grizzlies by Miranda de Pencier about a high school lacross team in Kugluktuk in Nunavut territory was a definite audience favorite with a human story of exchange between cultures and generations.

Rona, Madar-e Azim / Rona, Azim’s Mother (Jamshid Mohmoudi, Iran) is the second feature of the Afghanistan-born, Tehran-based director who had shown his first film, A Few Cubic Meters of Love at the 63rd edition of this festival in 2012. Both films were written and directed by Jamshid and produced by his brother Navid. Selected as Afghanistan’s entry to the 91st Oscars in the foreign language category though not nominated, the film focuses on a current malaise that has had repercussions on the lives of many around the world: the refugee crisis. The images of the protagonist, Azim (Mohsen Tanabandeh from Jafar Panahi’s Offside) doing the night-shift in the sewers of the city in a blinding white light accentuate the alienation or more literally expulsion of the refugees from the dominant society. The mother figure, Rona, whose body gradually deteriorates, could be taken as a metaphor for the collapse of Afghanistan, the native land of the protagonists. 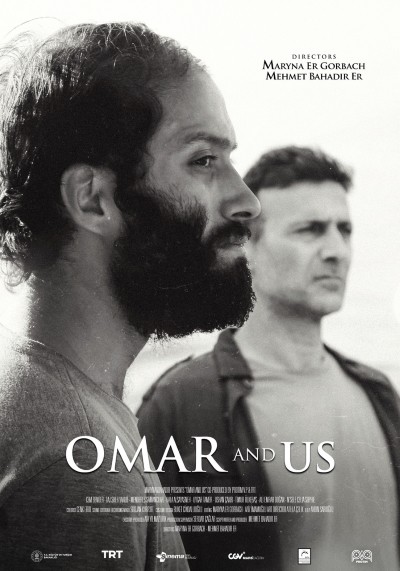 Widow of Silence (Praveen Morchhale, India) competing for the Special Award brought attention to the plight of the women during the civil war in Kashmir that has been going on for decades. There are many widows, but there are also many half widows whose husbands were disappeared. Even after several years, the widows are refused death certificates, unless they sell their land to bureaucrats at low prices or sleep with them. The film focuses on a woman waiting for seven years for the news of her husband, her eleven-years-old daughter trapped in this precarious situation, bullied by class-mates as the half-daughter and the mother-in-law who lost her voice since the disappearance of her son. The opening sequences of an elderly woman being tied to her chair by a young girl sets the tone of the film which uses this act of paralysis as a metaphor for all the half-widows of the valley bearing the burdens of a war that is not their making. The solemn beauty of the landscape is well interceded into the narrative to accentuate the human misery.

Among the films in the Special Screening section, Omar ve Biz/Omar and Us (Turkey), made by the husband wife team, Mehmet Bahadır Er and Maryna Er Gorbach was another refugee centered story although it had an issue with giving women voice, not so unusual for the millennial films coming from Turkey. The three females in the film are all helpless and silent: one is a Syrian who hardly speaks; the second is the American fiancée, who whispers few words in English now and then (probably played by someone who does not really speak English, at least not with an American accent) and the third is the wife of the brute ex-commander, the victim of patriarchy who soon dies.

The festival ended on a sad note: the closing evening with the long farewell speeches and a standing ovation to Michael Kötz. A younger director has been appointed to take over next year. What may that bring to one of the oldest festivals of Europe? This is a mystery at the moment.

Under The Turquoise Sky by Kentaro (Japan,/Mongolia/France/USA)

Under The Turquoise Sky by KENTARO 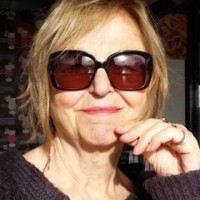 Gönül Dönmez-Colin is film scholar and author of several books on cinema. including Women, Islam and Cinema, Turkish Cinema: Identity, Distance and Belonging and The Routledge Dictionary of Turkish Cinema. Her latest monograph, Women as Images and as Image-makers in the Cinemas of Iran and Turkey is forthcoming from Routledge.