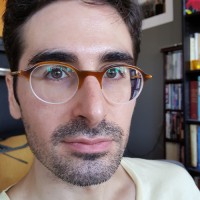 Trevor Mowchun is a Ph.D candidate in the Humanities interdisciplinary program at Concordia University and feature filmmaker currently based in Montreal. He completed his Masters in film studies also at Concordia where he wrote his thesis on cinematic contingency. His most recent scholarly projects are on “time narratives” (with an extensive reading of Jacques Tati’s Play Time), the concept of experience in the cinema of Stan Brakhage, cinematic automatism, and a Nietzsche inspired analysis of Paul Thomas Anderson’s The Master. In his dissertation entitled Metaphysics and the Moving Image, he attempts to show that various philosophical questions or problems, and even significant movements and turning points in the history of Western philosophy as a whole, have a kind of quotidian grounding and expression in the medium of film. His essays have been published in the journals Senses of Cinema, Film International and Evental Aesthetics. On the creative side he recently completed his first feature film called World to Come which has screened in festivals throughout North America.