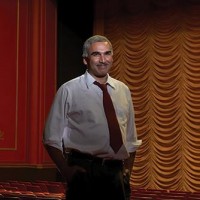 Though Prakash Younger’s interests range widely across the humanities (including English and world literature, political philosophy, geopolitical history, and art history), his work as a teacher and scholar is grounded by a long-standing engagement with the cinephilic traditions that have shaped Film Studies as a discipline. Though his work is rooted in close attention to aesthetics and the details of cinematic form, Younger’s ultimate goal as both a teacher and scholar is to show how films give us an enhanced purchase on the real world beyond them. By taking advantage of the access films provide to the experience of other times, places, cultures and sensibilities we enhance our ability to connect with the world we live in today; unlikely as it may seem, a French film from the 1930’s or a Bollywood film from the 1970’s may turn out to be the “message in a bottle” we have been waiting for, the magic lens that brings certain facts and possibilities of the present into sharp focus. Studying film is a detour that is justified by the fact that, in the end, it always gets us to the right place, faster.