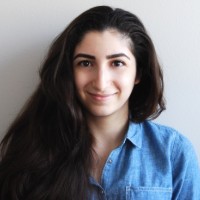 Mitra Moin graduated with distinction from Concordia University, receiving a Bachelor of Arts in Sociology in 2016. Born and raised in Washington, D.C. by a French mother and an Iranian father, she attended the French International School until 2013, where she took cinema classes. She has interned at various renowned news organization such as WAMU/NPR at The Diane Rehm Show, and the Washington Report, where several of her articles were published. She hopes to work in broadcast journalism in the future.