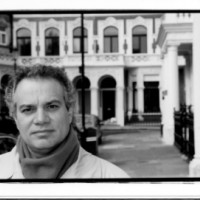 Poet, novelist, essayist, translator, Antonio D’Alfonso has published more than 40 book titles and has directed three feature films. He is the founder of Guernica Editions which he kept alive for thirty-three years before passing it on in 2010. He is also co-founder of the magazine Vice Versa and the Association of Italian-Canadian Writers. For his writing D’Alfonso has won the Trillium Award, the Bressani Award, and other prizes; and for his film Bruco (2005), he won two awards at the New York International Independent Film and Video Festival.