Lost in the Dark: The Elusive Film Noir

By Kelly Oliver and Benigno Trigo (Minneapolis: Minnesota UP, 2003) 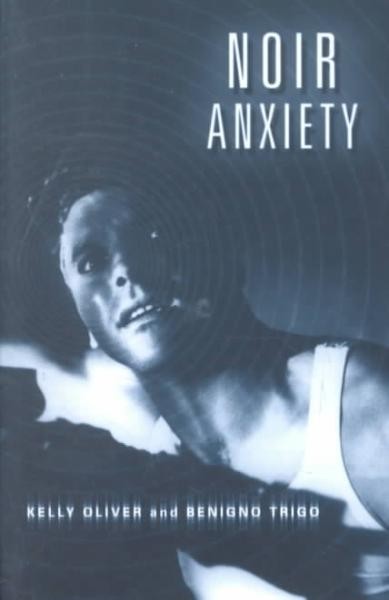 It is by now platitudinous to remark that film noir is, and has been for quite some time, a popularly meaningless term. To point to one of literally countless examples, witness the Guardian recently declaring that The Butterfly Effect (2003) is “noirish.” It hardly seems worth commenting on the many reasons why this is simply not so. At its most empty, noir is synonymous with scary, or simply not brightly lit; in this late stage of noir criticism—a most inundated area of film studies—it may be a more worthwhile endeavour to provide a list of films that are not noir. Regrettably (or perhaps deservedly, depending on your point of view), there is no one to blame for this state of affairs but film critics and theorists. Film noir has a truly legion number of books and articles devoted to it, from the trifling (The Ultimate Film Noir Quote Book) to the pedantic (Voices in the Dark: The Narrative Patterns of Film Noir). 1 Each generally offers its own criteria for what counts as noir, and a good eighth of the literature devoted to noir is concerned with this question only. The others tend to accept some of Paul Schrader’s definitions in his heavily cited and inventorial “Notes on Film Noir”: noir as period, genre, or style. 2 Most literature on the subject, at any rate, includes some kind of preamble that establishes what the author believes noir entails. I will circumvent this opening-paragraph imperative by borrowing from another, the first line of an article by James Naremore: “It has always been easier to recognize film noir than to define the term. 3 It is as if, by trying to pin down any stable characteristics in noir, the writers have damned the term to near-uselessness.

Authors Kelly Oliver and Benigno Trigo markedly sidestep this tradition in Noir Anxiety, a new book of stand-alone applications of psychoanalytic theory, in the feminist and postcolonial tradition, to films noir. To some extent, this frees up their debate, but it also limits it. One such limitation is their habit of using any style or theme of noir that has been suggested, concluding that it, as synecdoche, stands for noir as a whole. Madness, for instance, is taken as sufficient to include Vertigo (1958). Most frequently, they rely on what they semi-derisively refer to as The Trait Ascribed to Noir by Humanist Film Critics (although without all the capitals): fatalism. 4 At other times, they pay lip service to noir stylistics, which, due to their ubiquitous documentation, seldom need justification. Always, they discuss films that others have previously defined as such. In the end, Oliver and Trigo’s understanding of noir is as meaningless as that in popular use, and this is both refreshing, insofar as it does not contribute to the endless taxonomic efforts of noir critics, and frustrating, insofar as there is a lack of rigorous criteria. They choose a seemingly arbitrary survey of films, running from the emblematic Murder, My Sweet (1944), touching on Welles and Hitchcock, amongst less obvious choices, and concluding with an absurd celebration of Bound (1997). Officially, the authors of Noir Anxiety examine subject formation in noir, and for this purpose employ Julia Kristeva’s definition of the abject as that which “calls into question borders and threatens identity”: the in-between and undecided, to reduce the concept, and its ramifications on the self. 5 To this psychoanalytic end, such concerns as family and race are discussed. In practice, however, the authors use a spectrum of Freudian approaches, and their better chapters occur when they drop the eisegetical platform and concentrate on what is manifest in the film itself, as they do in their excellent essays on jokes in Chinatown (1974) and the uncanny in The Secret Beyond the Door (1948). These pieces in particular are ripe for further inclusion in noir anthologies, and indeed, without them Noir Anxiety would be a routine affair.

To make their case, Oliver and Trigo are frequently obliged to provide a synopsis of a convoluted plot or complex theory, and their success varies. A page-long summary of Murder, My Sweet is so compacted as to make the story more redundant than it ever was. With theory, they have better luck: their summary of Freud’s work on jokes in the transparently titled “Jokes in Chinatown: A Question of Place” is an expertly delivered explication of a book-length project. 6 Granted, they do offer sufficient space for this summary, even finding time to psychoanalyze Freud. They affirm that he often “repeats his anxious concern that psychoanalysis might be taken for a bad joke”; Freud is anxious, they tell us, because first-time patients ordinarily receive his efforts at dream analysis with the declaration that he “must be joking.” 7 It is a delicate matter to write about jokes and provide them simultaneously, for readers are set to detect them with a particularly wary judgement. To their credit, Oliver and Trigo manage.

“Jokes in Chinatown” also differs from most of the rest of the book for its attention to framing. The main thrust of their argument is that “joke-work,” 8 i.e., telling jokes, is a method of displacement, and Chinatown’s jokes are displaced onscreen to a compositionally in-between position (particularly bad jokes; Chinatown is a film that, they tell us, is “not funny and has no punchline”). 9 One finds that there is frequently a spectre of the joke present during the telling, as during the (in)famous “Chinaman” joke scene, when Jake Gittes (Jack Nicholson) is subjecting his underling detectives to the off-colour attempt at humour while, unbeknownst to him, Evelyn Mulwray (Faye Dunaway), “moves from the invisible space inside Jake Gittes’s office to the background of the take, where she stands in focus but motionless”: 10 the moral conscience of the joke. Apart from bringing in a marginal aspect of Freud’s work, this and other examples show how attentive the authors can be to mise-en-scene, so often ignored in psychoanalytic criticism.

This scene is also a testament to Polanski’s skill as a director, for he creates a truly excruciating moment of embarrassment for the audience. It is arguable that his use of embarrassment is one aspect of the dredging up of noir themes that makes Chinatown the neo-noir it is. Today, when one views historically noir films in the theatre it is an embarrassing affair (particularly the very earliest noirs, not the later B pictures). The inevitable use of voice-over garners laughs; the ritual practise of slapping sense into a disoriented femme (fatale or no) arouses shocked hoots; ad nauseam. It as if one and all have read “Notes On ‘Camp’” and swallowed whole the Susan Sontagonism that makes it naïf to enjoy, without recourse to irony, a film such as The Maltese Falcon (1941), one of “the greatest Camp movies ever made.” 11 If embarrassment is a developed audience reaction to noir, as Sontag’s essay suggests—even so early as the sixties—it is to Polanski’s credit that he abuses it.

The authors are obliged to pay attention to the camera in The Secret Beyond the Door as well, a film that, although Fritz Lang may have disowned it, is nonetheless an expertly put-together, paranoid noir. 12 While The Secret is on first viewing merely a high concept pitch combination of (the 1940 Hitchcock picture) Rebecca meets Bluebeard, Oliver and Trigo’s article on the film, “Sleeping Beauty and Her Doubles: The (Uncanny) Secret Beyond the Door” traces a lineage from the explicit Freudianism in the film, through noir, to Sleeping Beauty. 13 This last is an unlikely but persuasive comparative to The Secret insofar as the protagonist, Celia (Joan Bennett), and Sleeping Beauty both have to dispatch the oppressive mothers of their husbands. The elucidations of influences at work in the film make it an even greater pleasure to watch.

“Sleeping Beauty and Her Doubles” also introduces the theme that Oliver and Trigo close the book with in their essay, “The Space of Noir.” This is what has come to be called “architectural determinism,” a theory introduced in The Secret under a different name, “the felicitousness of rooms.” We are asked to interpret the significance of place in relation to feelings and actions. In this theory, different places produce different effects. For Mark [Michael Redgrave, playing the homicidal husband to Celia], there is something inherent in the structure or the material composition of [a certain room] that produces its effects. Fate is determined by the physical presence of one’s surroundings. 14

While this may sound merely like sinister Feng Shui, what the authors later relate the theory to is Freud’s view of the psyche as “determined by an ‘architectural principle’ and as susceptible to ‘topographical dissection’.” 15 This enables a discussion of the physical space of rooms in noir as they stand in for the psyche of a given character—a sort of inverse psychogeography. Not surprisingly, the rooms of noir are mostly locked-up, oppressive places. This proposition is all the more interesting when one considers rural noirs, such as Out of the Past (1947) or They Live by Night (1949). Although the country may be an ethically privileged space in noir—think of the relationship between city and country in Double Indemnity (1944), where the city and supermarket are the domain of the femme fatale while the country and picnic are that of the virginal daughter—it is still eminently corruptible. If one takes the outdoors as the mental map of the rural noir protagonist, there is a distinctly pastoral strain, in which the city and country are pitted against each other, the former threatening to poison the idyllic latter.

The rural idyll has long been poisoned in the Wachowski’s Bound, a film the authors of Noir Anxiety give high praise to. This is how they conclude their chapter on the film: “Bound is unique among neo-noir films in that it presents lesbianism as a real alternative to patriarchy while it opens up the possibility of a fluid female/lesbian desire independent of men.” 16 One suspects that perhaps they have not seen the film since it was in release or that they were beguiled by the shrewd posting of feminist pornographer Susie Bright as the “sex scene consultant” on the film. In any case, they have neglected the mandate of their theoretical mother figure, Laura Mulvey: in typical Hollywood fashion, the banal, noisome sexual politics of Bound embrace lesbianism only so far as it is titillating to the heterosexual male viewer. Bound may have “authentic” lesbian extras, but this does not justify the laudations it receives.

It is an unfortunate way to end a provocative book (for after they deal with Bound at length in the ninth chapter, they bring it up at the close of the tenth and final as well). Nominally concerned solely with abjection, Oliver and Trigo’s more valuable insights are focussed on other psychoanalytic notions. However, in the main, their overall point holds: the films themselves, they argue, betray an ambivalence (towards race, relations, character, or what have you) that amounts to abjection. So do the nomenclatorial projects of noir essayists generally. In the endless attempts to settle what noir might be, the fact of the matter is now abject—jettisoned and meaningless. Critics may lament it, but this review, at least, is no jeremiad. Perhaps abandoning the elusive search for a stable understanding of noir is even healthy; Oliver and Trigo’s work certainly indicates so. “The abject is not what it seems, it is neither one nor the other, it is undecidable”: such is noir, they incidentally prove, and so criticism comes to mimic content. 17