The cinephilic city of Montreal was blessed with the presence of Abbas Kiarostami, who was invited as head of the film jury for the 2000 24th Montreal World Film Festival. The festival also paid hommage to Kiarostami with a retrospective of nine feature films. Offscreen thanks the festival for inviting one of the grand masters of contemporary cinema and making the following interview possible.

PR: The very first film of yours that I saw was in 1992, the English title of which is And Life Goes On, and I knew from the very first shot that I was watching something totally original, perhaps unique, so, I wanted to ask a question about the way you shoot perpendicularly to the action at 90 degrees. In this first shot we are looking at a tollbooth and cars are going by, and then for the rest of the film, predominantly, we are travelling in a car and the camera is looking at 90 degrees to the landscape, the people and the houses, and I wondered about how the camera frame seems like a window on the world, but also functions like a mask, so if you could just talk a little bit about that kind of style…

AK: My approach to cinema is according to the situation that exists. This is a spontaneous process and I have not thought of it in advance. And Life Goes On was my own actual experience. It was the third day of the earthquake in Iran when my son and I went to see what had happened to the kids who had acted in my film. Therefore, I think my first mental image of making this film is the reality and my one-day trip to the earthquake-stricken areas. I think it is the idea that dictates the form. I always believe that when one has the content in mind, the form is created without much thinking. I mean once the film has been shot, I can see what kind of style I have chosen.

PR: Yes, I am obviously interested in the “content” of your films, also, and I am only asking questions like this because I’m very struck by the originality of the style, and how it does change as well from film to film. For example, in The Taste of Cherry, you will use a car, which is different because you are always going up and down hills, and the landscape is changing in interesting ways, so sometimes it is very barren, and eventually you are amongst vegetation. My experience of watching your films is that I am so fascinated by what I am looking at, so to me, the cinematography is part of the essence of your work. 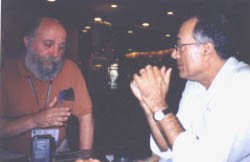 AK: It is your perception of the film that can help you find the differences of style in my films. As a filmmaker, a distance of five years separates the two films and it is for this reason that I say I, too, have to watch the film as a viewer, because I do not watch my own films. I have made these films and for me they lack the same originality that you find in them. For me to realize whether there is a difference in the way these two films ask questions, I have to put them side by side and compare them. The way you view the film is yours or perhaps a mix of your view and the film but not necessarily the film’s own point of view.

There is definitely a reason for choosing to shoot any given scene in a specific manner in my films. When you choose, it means that you disregard other possible choices. So, there has to be a concrete reason. Perhaps if you have any specific scene in mind, I can talk about that…

PR: OK For example, in your most recent film, the title The Wind Will Carry Us which I know is the title of a poem, and this is very important in terms of the film, but, at the beginning of the film I am so struck not by “wind” but by the earth, by gravity… a children’s ball bounces down a hill and the camera is following the ball, and then water is running down…, but the central character always has to go to the top of the mountain (which is very funny, I think) in order to hear his cell phone, so for me “gravity,” actually is the force which seems to be driving the film initially…Again, this is my “reading”…

AK: You can always find similarities between films. Some people point out, for example, graphic elements in a shot or actions, for example in Where Is My Friends House? , you see the kid climbing the hill to reach his friend [as a challenge?]. Someone else’s reading is that this is similar to the man climbing the mountain again in The Wind Will Carry Us but this time, here, it is towards death (marked by the cemetery) although the action is almost the same. I did not have this connection in mind consciously, after 10 or 15 years between making these two films. But I believe these choices take place at an unconscious level for each film. 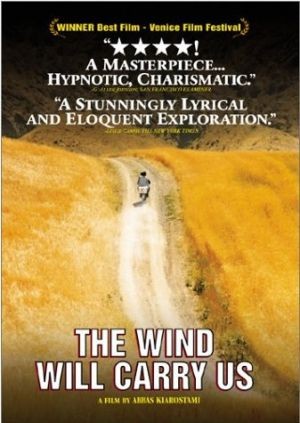 PR: I didn’t realize, the first time I saw The Wind Will Carry Us, that it took place in Kurdistan. I knew I was seeing a different landscape and a different culture, but in this film and in the previous film, The Taste of Cherry, you are dealing with marginal characters from other ethnic groups. For example, in Cherry, I think that every person who gets in the car is from a different ethnic group, and I thought… People are always asking questions on politics in Iranian films, but, to me, this was very subtle inclusion of politics. The very fact that these characters were from other ethnic groups, it is not obvious what you are saying about outsiders but all of these “outsider” people are helping this man. I found this curious too, so, what am I asking well, Is there a very subtle political subtext in these two films based on ethnicity?

AK: Not in the customary way of political films. The political films are the ones that try to replace a regime with another one. With this definition, my films are not political films at all. The real political films deal with social issues, concern the social/political landscape that one lives in, and thus are based on reality. However, I have a strong feeling against films which are “ideologically” political and lose their function in a short period. The real political truth can be found in films that don’t claim to be “political.” But I can’t say if these two films are political or not. First we should define politics, and find out how the viewer defines politics as well, and then we can discuss if the film can be categorized as a political film.

PR: Well, I’m glad that you’ve said that with regards to the “ideologically” political film. I think that in a human sense, even though there are bad or negative things happening in your films, there’s always a movement towards a kind of a positive thread, that is again subtle and not obvious. In this particular case in The Taste of Cherry, I felt it was in the relationships with these “foreigners” which actually helped the man feel more positive about life. No, it’s not political because no one is going to make a political analysis of that, but it is a kind of “human politics”.

It struck me that “The Traveller” is like the “Citizen Kane” of the Iranian children’s cinema, or something, it seems like a blueprint for so many other films that have been made in the last 20 years involving children in Iranian cinema. Is this the way this film is discussed in Iran, is it regarded as being…

AK: It was the first middle-length film made in Iran with this kind of subject, some 28 years ago.

PR: I was even surprised at the boy running all the time, which is not typical in your films, but is very typical now in other Iranian films.

AK: I think “running” is a character of the East and not necessarily Iran. The Easterners or the people of the third world have to work much harder than other nations. But if we really want to consider the meaning of these lives, this running is neither futile nor devoid of reason. They don’t have a choice and that is a reality itself. This view encompasses not only the children but also the adults. Right now, most Iranians work three jobs. We even have an expression in Farsi ‘running like a dog’ which means working hard in order to make ends meet.

PR: I had seen Naderi’s The Runner, which I had always thought was a great film, but I didn’t realize that there was a precedent in your work. I had always thought of him as being the other Iranian director apart from yourself who was an original stylist, but even Naderi was influenced by you.

AK: I actually started my career as a filmmaker before Naderi, and in any case, this situation [of running] is a national one.