Interview with the Quay Brothers 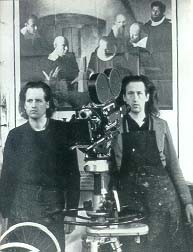 The Brothers Quay are among the few directors of animated film to have attained fame through the torturous and sometimes inconvenient road of auteur cinema. American by birth and English by adoption, the brothers, or rather twins Stephen and Timothy Quay, have, for more than twenty years, been making dazzlingly beautiful films that are at once disturbing and hermetic. Works which do not possess a definitive narrative path, but are immersed in a surreal, somnolent atmosphere caught half way between myth and nightmare.

The puppets and animated objects we find in the Quay brothers films seem to come from a mind intoxicated in an absinthe-induced high, even if the visual references recall an expressionist rationality marked by an East European sensibility. Cult objects all over the world, these films are the fruit of autonomous projects by the Quay brothers and commissions from some of the most important television stations in Britain (BBC, Channel 4), of commercial networks like MTV, and from rock stars of the caliber of Peter Gabriel.

Stephen and Timothy Quay were invited guests in Trieste as part of the event dedicated to the Galician (Central Europe) writer Bruno Schulz, whose work was the inspiration for one of their masterpieces, Street of Crocodiles. The occasion saw the Italian avant-premiere of their new film In Absentia, after the long period of inactivity following their feature film Institute Benjamenta (1995). The projection of In Absentia at the Miela Theatre, seat of a brief retrospective, at the same time stunned and fascinated the public with the extraordinary impact of image and music, the latter composed by Karlheinz Stockhausen. We met the directors on their return from an intense ‘wine-tour’ in the wine cellars of the old city…. 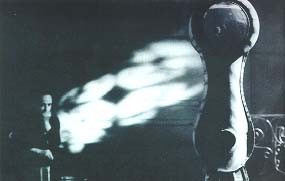 
How did In Absentia come about?

It was a film commissioned by the BBC as part of a series called “Sound on Film International,” born from the collaborations between musical composer and filmmaker. Each filmmaker was assigned a musical passage which became the starting point for the construction of a short film. We worked on a composition by Karlheinz Stockhausen, “Zwei Paare.” The day we listened to the piece for the first time there was a release within us of a torrent of ideas and visual flashes. We then started immediately with the direction of the film without having a real and proper work plan, but developing it as we went along.

For the story we based ourselves on the real life event of a woman who was enclosed in a psychiatric hospital, who would write love letters every day to a particular man. The surprising thing is that when Stockhausen saw the film at an avant-premiere he was moved to tears. We only later learned that his mother was imprisoned by the Nazi’s in an asylum, where she later died. Even for us this was a very moving moment, especially because we directed the film without knowing any of this.

When considering the visual aspect of this film we can note a use of lighting which is extremely articulated, almost as if serving a narrative function…

This is in part because Stockhausen’s music felt as if it was saturated in electricity, and consequently we decided to give the film a very particular type of lighting, almost divine. This way we shot almost all of the scenes with natural sunlight coming from the window in our studio, then utilizing mirrors and reflecting panels to sculpt the light according to the exigency of each scene. Being dependent on natural lighting tied us to meteorological conditions, hence we exploited the light quality which entered our studio from time to time to realize an animated sequence. Additionally we simulated the lighting phenomenon of the so-called ‘heat lamp,’ which was in frequent use in many regions, to represent the mental landscape of the suffering protagonist. 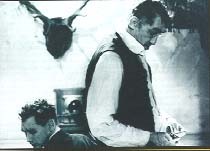 This use of lighting recalls, somewhat, the films of Andrei Tarkovsky and Alexander Sokurov?

In fact Tarkovsky, in the beginning of his career, made a very strong impression on us. We loved all of his films up to Stalker, and then with Nostalghia and The Sacrifice I think he may have lost some of his inspiration. Even Sokurov has directed some extremely beautiful films, like Whispering Pages, which is our favorite.

How did you end up deciding to use the cinemascope format for this film?

Because we wanted the film to match the grandeur of the music, which was also in Dolby Surround. It was an occasion for us to see our little animated objects in a scale far larger than what we were normally accustomed to. We wanted to have a striking impact on the spectator, like Stockhausen’s music. So we adopted an aggressive visual strategy.

In effect, Stockhausen’s music has a very powerful impact…

Stockhausen’s music is so intense, and with such an impressionistic profundity; it is absolutely unlike the usually intense soundtrack, it originates from the stars, the cosmos, from something in our universe, the sounds that emanate from the universe, a pure alterity. He refers to it as a light which originates from Sirius, the Dog-Star, and you can believe it.

How did you get to know the work of Bruno Schulz and what is its relationship to your poetics?

We met him thanks to a Polish friend who introduced him to us as the “Polish Kafka.” Then, naturally, we came to learn that it was not quiet the case, that they were two people similar in many respects but also different in others. The first time we read him he did not make a particularly striking impression. We found it interesting, but more from a strictly literary standpoint. Subsequently, after a second reading, it managed to make us understand animation as a type of metaphysics. Meaning that, when Schulz in Cinnamon Shops, summarizes the “thirteenth month of the year” I think I discovered a metaphor that adapts itself well to animation, or rather animation that lives on the margins of mainstream production. Animation that has not been colonized by idiots or by television. We want animation to be like a mark on the margins, a grand apocryphal, in the same sense as Bruno Schulz’s work. It is a defiance we picked up thanks to his work, which has pushed us to create something of which we are quite proud.

Where does this interest in East European culture come from, something which touches practically all your work?

For us there are still unexplored corners in some obscure part of the universe. And the world of animation, puppet animation, has always had a strong tradition in this area, something very different from the Disney tradition. Auteurs like Wladyslaw Starewicz, Walerian Borowczyk, the Czech school, the Russians, have all produced works of animation that are truly fantastic.

Therefore it was the world of animation which introduced you to East European culture?

It was really the first thing that we learned, thanks to a film festival held at Philadelphia and the screenings organized by the College. And then all that musical tradition, with people like Leos Janácek, Alban Berg, Igor Stravinsky, and then Fyodor Dostoevsky with his The House of the Dead. These were for us beacons of light which introduced us to a whole constellation of stimulating and uncensored possibilities.

In your films there is often a powerful air of claustrophobia, of nightmare, somewhat like the stories of Kafka.

It is not so much a nightmare. We really believe that with animation one can create an alternate universe, and what we want to achieve with our films is an ‘objective’ alternate universe, not a dream or a nightmare but an autonomous and self-sufficient world, with its particular laws and lucidity; a little like when we observe the world of insects, and we wonder where the logic of their actions comes from. They can not talk to us to explain what they are doing, it is a bizarre miracle. So, watching one of our films is like observing the insect world. The same type of logic is found in the ballet, where there is no dialogue and everything is based on the language of gestures, the music, the lighting, and the sound.

What has changed in the world of animation since you made your first film?

Above all else, there has been a loss of interest on the part of committees and producers with regard animation in general. In fact In Absentia is the first animated film that has been commissioned in the last eight years, outside of a few videoclips. We directed out first film in 1995, Institute Benjamenta, and then for five years we were practically out of work. The production situation is not any better in Great Britain, because, for example, Channel 4 has really cut down on room for experimentation. 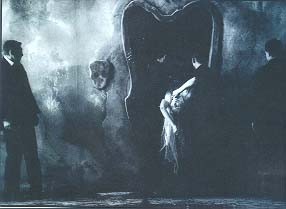 
What are your future plans?

We would like to continue on the path taken with this last work, by directing In Absentia Part 2, Part 3, etc. But I think this would be practically impossible because, besides other reasons, there is no public for this type of work, especially on television. Committees are often proud of producing a film like this, but when they see the public, they change their mind. For this same reason we realized that this film, which was shot on 35mm, would be wasted if shown only on television, and hoped it would have an independent life on the big screen. We asked the BBC for the rights to distribute the film in theatres and they quickly agreed. We were able to give this film a second life, which otherwise would have disappeared in the black hole of the television archive. Anyway, in this period we have taken over the direction of some ballets, one of which is dedicated to the work of E.T.A. Hoffmann, produced by Channel 4, but in reality our desire is to continue making animated films. We have a new subject which we are shopping around, but we’ll see whether it will sail.

For more information and images on this film please go to the following site: In Absentia